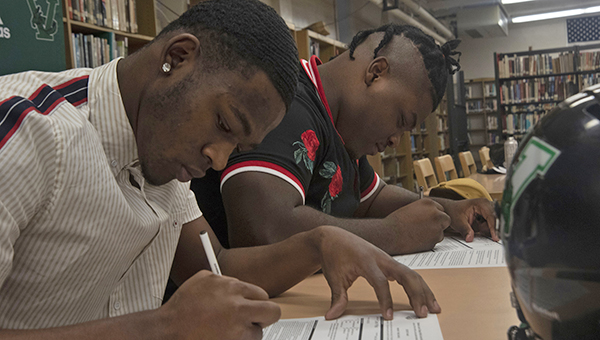 Like most high school seniors, Marquise Blackmore weighed his options and picked a college that offered the best academic program for his interests.

That it happens to have a really good football team that wants him to come play for it is just a bonus.

Blackmore, a defensive lineman at Vicksburg High, signed with reigning NJCAA national champion Mississippi Gulf Coast Community College on Wednesday. Blackmore said he was happy to go to a top-flight football program, but books and not blocks were what really led him to sign there.

“They’ve got a certain program set up for athletes to help them succeed in their classes. When he told me about that, I knew that’s going to be easy for me to go there. Academics are definitely important for my mother,” Blackmore said. “It’s a really big deal. My mom likes education over my athletics, so it’s really big for her. And getting somewhere out of Vicksburg is a really big accomplishment.”

Blackmore has a 3.2 GPA and plans to major in mechanical engineering at Gulf Coast. VHS offensive coordinator Ben Shelton said he respected the logic behind Blackmore’s decision.

“He’s got a good head on his shoulders and he understands the world,” Shelton said. “He knows that he has more of a chance to make a future in other things other than football. He’s just using football as a means to get that.”

Blackmore was one of two Vicksburg players to sign on college football’s national signing day on Wednesday. Running back Cedric Phillips, the 2019 Vicksburg Post Offensive Player of the Year, signed with Hinds Community College.

Phillips was happy to sign with Hinds, which was his first and best college offer.

“It’s a big day being able to sign. It’s just a blessing,” Phillips said. “(Hinds) was my first offer, plus they were staying in contact and showing more love than other colleges. So I feel like that’s my home and I’ll be comfortable there.”

Both Phillips and Blackmore were two-year starters for the Gators who played multiple positions during their high school careers. The 6-foot-2, 311-pound Blackmore played on both the offensive and defensive lines. Phillips was originally a wide receiver, moved to running back this season, and has also played defensive back.

Blackmore will play on the defensive line in college, while Phillips said Hinds plans to use him as a hybrid slot receiver and running back.

“He said he’s going to use me at receiver and running back, and I kind of like that since I played both in high school. I think it will be a good fit,” Phillips said.

Shelton had high praise for both players, not just for what they’ve done on the field but off it as well. He said both have been team leaders who took care of business on a number of fronts.

“It’s great to see, especially because both of them have been leaders since the day we got here,” Shelton said. “They’ve done everything we’ve asked. It’s the epitome of a perfect player you love to coach and have. Both of them are very smart, they work hard, they understand the game, and they do all of the little stuff the right way. And it shows. They’re the two that are signing right now.”