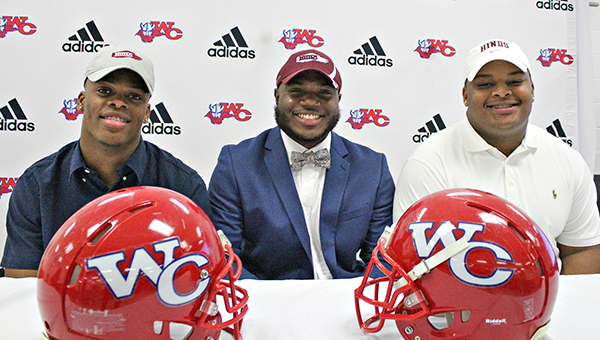 Chris Winston, Demond Patton and Malik Sims all took different routes to their decisions on which college football program to sign with.

When it came time to put pen to paper on Wednesday, however, they all converged at the same spot.

The three Warren Central teammates all signed with Hinds Community College on national signing day, happy to stick together even if each had their own reasons for going there.

Patton was a three-year starter who finished as Warren Central’s career leader in receptions (82) and receiving yards (1,327). He caught 41 passes for 619 yards and four touchdowns in 2019.

Despite his impressive production, Patton said Hinds was the only college that offered him a scholarship.

“There were some more schools looking at me, but they never went out farther to offer me a scholarship. They were just talking. Hinds has been there since 10th grade. They’ve been talking to me a lot, so I feel like this is home,” Patton said. “It’s a very good spot. Hinds can take you somewhere. I’m a true believer in that.”

Winston was a two-year starter on Warren Central’s offensive line. He played in the 2019 Mississippi-Alabama All-Star Game and was a second-team Class 6A All-State pick by the Mississippi Association of Coaches.

He had a few more offers than Patton, but like his teammate said the decision to sign with Hinds was swayed by a comfort level that was hard to match.

“I feel like I could trust them. They’ve got a good team coming up, and I feel like we can make a run at a state championship or even a national championship,” Winston said. “We’ve got a lot of guys that are familiar faces over there. Then it’s close to home as well, so that played a big role.”

Winston played tackle and center in his high school career, and originally was a defensive lineman. His versatility has created some uncertainty about where he might play in college, but Winston said it’s likely to be center.

“It’ll probably be center. They’ve got an empty spot over there and I’ll try to go get it,” he said.

Sims was the 2019 Vicksburg Post Defensive Player of the Year. The hard-hitting linebacker had 82 tackles, 10 tackles for loss, and two sacks last season.

He committed to Hinds in a ceremony last week as a birthday present for his mother, Annie, and returned to Warren Central’s library on Wednesday for a more low-key signing day.

Sims said he was fired up about what promises to be a large Vicksburg presence on Hinds’ roster next season. In addition to the trio that signed Wednesday, defensive lineman Vertez Shorter is a returning sophomore and wide receiver Corey Wilson, Jr., is transferring to Hinds from Southern Miss.

“It was something we talked about, start off there and go from there. We’ve all three got talent,” Sims said. “We all get to play with each other one more time.”

The three football players weren’t the only signees for Warren Central on Wednesday. Austin Johnson also accepted a scholarship offer to work as an equipment manager at Holmes Community College. 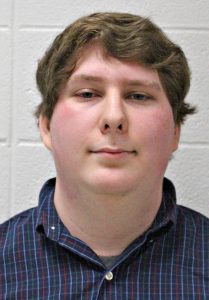 Johnson continues a long tradition of Warren Central managers who have gone on to the college ranks. Several have worked at Mississippi State and one of them, Michael Parson, is the director of equipment services for the NFL’s Houston Texans.

“To be able to do it for free and go there full-time is good. It’s what I want to do, so I’m very happy about it,” Johnson said. “I think the last three years we’ve had one every year. So that’s really good to have one every time.”

Johnson said he started managing after playing one year of football. He enjoys the game but didn’t enjoy playing, and found a way to still be around the game he loves. Now, it will pay for his college education.

“I played for a year here, but I didn’t really enjoy it as much. I came back to do this. I still enjoy football, so I’m glad to be around it every day,” Johnson said. “I’m excited about this. I’m grateful to the coaches here for all they’ve done for me. They’re the reason I’m doing this.”