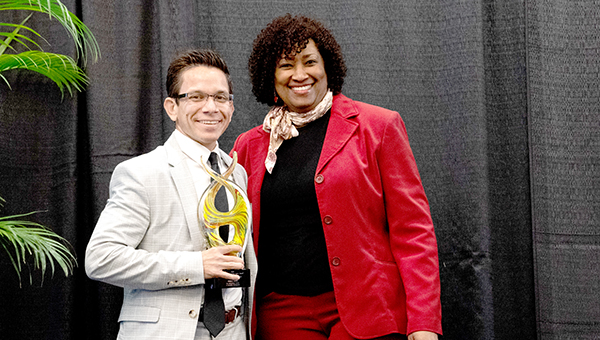 Diaz, who has served the partnership since 2017, was recognized for “extraordinary service in economic development.”

The award is presented annually by the Mississippi Development Authority to the state’s most deserving leader in that field of expertise.

According to the MDA, recipients of the award must:

• Exhibit professional competency and consistent collegiality with his or her peers

• Have gone beyond the norm in the input of time, energy and resources to further the goals of economic development in Mississippi and to bring honor to their profession in general

The award is named for Marsha Nell Hamilton, a graduate of Jackson State University who served at the Mississippi Development Authority from 1983 until her passing in December of 2012.

Hamilton’s area of specialization was global trade and international diplomacy.

As a manager of the international trade office, Hamilton worked on behalf of small businesses to promote and distribute their products and services worldwide. She opened and managed the state’s foreign office network, navigating state contracting and foreign currency accounts as she made the most of appropriated state resources.

Hamilton was largely responsible for the establishment of the now-permanent MDA global trade STEP grant, which to date has provided more than $500 million in direct funding to small businesses.

The Partnership is the umbrella organization for the chamber, port commission and the Economic Development Foundation.

“It was an honor to be able to present at the MEDC 2020 Legislative Luncheon with Pablo, (District 5 Supervisor) Kelle Barfield, and (Superintendent of Education in Corinth) Lee Childress about how to involve education in driving economic development across MS. We were excited to support Pablo as he received the Marsha N. Hamilton Spirit Award,” Shealy wrote. All education leads to employment was the message.”