Future of pickleball courts remains in the design phase 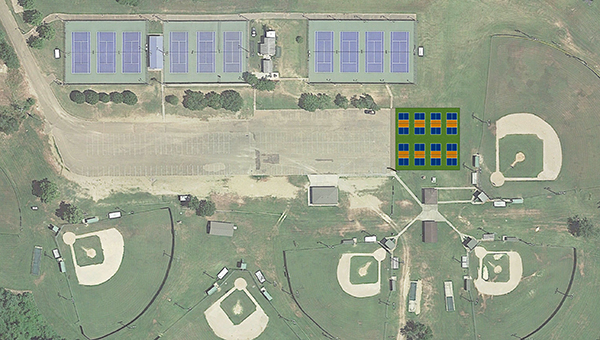 The Board of Mayor and Aldermen on Oct. 18 approved an agreement with Neel-Schaffer handle engineering for the construction of eight pickleball courts near the tennis courts at Halls Ferry Park.

Vicksburg’s project to build pickleball courts at Halls Ferry Park could be ready to go out for bid sometime in March, the project’s engineer said.

But Tom Henderson with Neel-Schaffer engineers said the project’s cost has not been determined, adding, “We’re still working on the design. I hate to put a number out when we’re still trying to finalize things.”

Pickleball is a game played with a paddle and a plastic ball with holes that employs the elements of tennis, Ping Pong and badminton that is played both indoors and outdoors on a badminton-sized court and a slightly modified tennis net.

But the tape used to line off the courts was damaging the tennis courts, Monsour said, emphasizing the need for building the new courts.

“I’ve already set the money aside; because it was in the bond issue prior to me getting here,” Monsour said. “I just have to make sure it comes in under budget.”

The Board of Mayor and Aldermen on Oct. 18 authorized the project and approved an agreement with Jackson-based engineering firm Neel-Schaffer not to exceed $23,000 to handle engineering for the construction of eight pickleball courts near the tennis courts at Halls Ferry.

Plans show the courts will be located on the east side of the courts which has a slight downward slope. Henderson said the slope has to be considered in the project’s design.