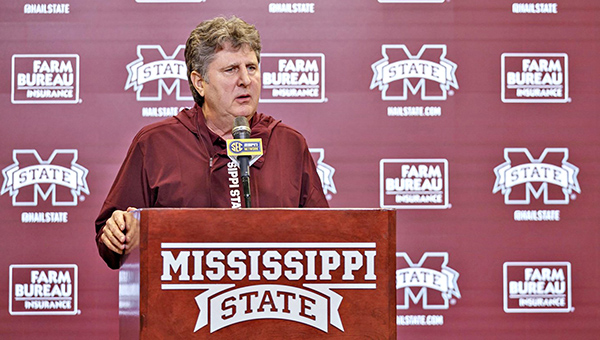 Mississippi State football coach Mike Leach speaks to reporters at a signing day news conference on Wednesday. The Bulldogs had the No. 27 recruiting class in the country according to 247 Sports’ composite rankings. (Mississippi State Athletics)

ATLANTA (AP) — The Southeastern Conference dominated the recruiting landscape even more than usual this year.

As the remaining unsigned football prospects finalized their college plans this week, the SEC had six of the nation’s top eight classes, according to composite rankings of recruiting sites compiled by 247Sports.

The rankings included No. 1 Georgia, No. 2 Alabama, No. 4 LSU, No. 6 Texas A&M, No. 7 Auburn and No. 8 Florida. Only Clemson at No. 3 and Ohio State at No. 5 broke things up.
The SEC last had as many as six teams in the top eight in 2014, when it had seven of the top nine classes. The SEC had seven of the top 10 classes this year, with Tennessee moving up during the late signing period to grab 10th place.

“Maybe it’s because of the results LSU had on the field, the new era at Florida and the general positive momentum a lot of these schools had,” said Barton Simmons, the director of scouting for 247Sports.

Alabama and Georgia had been behind Clemson in the 247Sports Composite rankings after December’s early signing period. Georgia moved to the No. 1 spot by signing more players this week, a group headed by four-star running back Daijun Edwards.

This marks the second time in the last three years that Georgia has topped the 247Sports Composite rankings. Georgia also finished No. 1 in the Rivals rankings for a third straight year.

“This class will be judged on how we finish, not where we’re ranked right now,” Georgia coach Kirby Smart said.

Texas A&M made one of the biggest additions when it beat out Alabama for defensive tackle McKinnley Jackson of Lucedale, Mississippi, and George County High School. Jackson, ranked 61st in the 247Sports composite, was one of the few top 100 recruits who remained uncommitted until Wednesday.

Tennessee vaulted into the top 10 by signing wide receivers Dee Beckwith and Malachi Wideman. Both are multi-sport athletes, and Volunteers coach Jeremy Pruitt said they also will have the opportunity to play basketball at Tennessee.

The four SEC schools with new coaches — Mississippi State, Arkansas, Ole Miss and Missouri — are currently 10th through 13th and ahead of only Vanderbilt in the league’s recruiting rankings. They faced obvious challenges because of the transition, as Mississippi State’s Mike Leach didn’t even take over until after the December signing period.

“We still have a couple scholarships remaining if a couple kids pop up, which we did deliberately because lately there’s been kids to pop up from one year to the next. We didn’t want to diminish all of our options,” Leach said. “Really impressed by the class signed by the previous staff and our recruiting department.”

Ole Miss’ class consisted of only 18 players, three of whom signed on Wednesday. Running back Henry Parrish joined the fold along with a pair of offensive linemen, Cedric Melton and Luke Shouse.

“When we were here (in December), we talked about it being halfway through with two different signing days. Today it’s still not over,” Ole Miss coach Kiffin said. “We left ourselves some room for some kids that are still out there. Some grad transfers, some regular transfers, and also, we can save some for next year too.”

One of those players the Rebels — and a few other teams — are hoping to add is five-star running back Zachary Evans. The 16th-ranked player in the country in the 247Sports composite remained unsigned Thursday after being linked to a few different SEC programs.
Georgia never confirmed whether he signed with them in December. Evans visited both Tennessee and Ole Miss in January.

“It might be that he just shows up (somewhere) in June and starts taking summer classes,” Farrell said.

Ole Miss also had three mid-year enrollees come aboard in January, and signed 12 players in December. Kiffin said the coaching change in December slowed the Rebels’ efforts, but the groundwork is being laid for deeper classes moving forward.

“It’s hard to come in with this early signing period when already 75 percent of the kids are gone,” Kiffin said. “We didn’t want to reach, like I said. We’ll sign deeper and better classes every year that we’re here and have more time to go and recruit guys with the staff. We’ve already been around the schools, you can’t talk to them, but we’ve seen the juniors and seen their coaches and things like that.

“We’ve already had several of the top recruits on campus at some point over the last three weekends,” Kiffin continued. “It goes dead here with the new rule at the end of February. I think March 1 things go live again. We have a lot of work to do.”