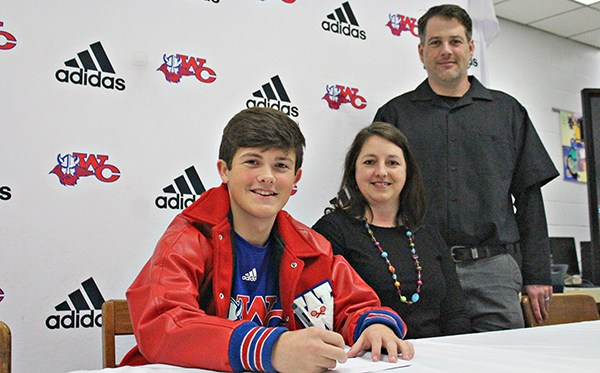 When he was in fifth grade, Ian Gordon went to a tennis camp for spring break. Whether it was an effort by his parents to get him out of the house for a week, to help make friends, or to sample a sport, it was a life-changing experience.

“I went to a spring break camp for about a week in fifth grade with Alcorn students. My mom thought it would be good for me and, sure enough, it’s worked out,” Gordon said with a laugh. “Ever since then I’ve been playing almost every day or every weekend.”

Gordon has no plans to stop playing competitively any time soon. Just ahead of his senior season at Warren Central, he has signed to play at East Central Community College.

Gordon is the fourth player from Vicksburg to sign with East Central in the past five years. Former St. Aloysius star Chris Albert is a freshman on this year’s team. Warren Central alums Joseph Jabour and Willie Wooten played there from 2016-18.

Gordon said East Central’s recruitment of yet another Warren Central player, John Jabour, indirectly led him to sign there.

“I know that they recruited John Jabour. He signed with Jones, but they started talking to me,” Gordon said. “It was a pretty easy decision, because I didn’t feel like Gulf Coast was the right one and I used to live in (Newton County) so Decatur seemed like a good fit.”

Gordon qualified for the 2018 MHSAA Class 6A boys singles tournament, but lost 6-0, 6-0 to Oxford’s Bo Nash, who now plays college tennis at Chattanooga. It was a humbling experience Gordon chuckles about now, but also one that showed him how much he’ll have to work this season to reach an elite level.
He said he’s ready for that challenge.

“It’s going to be tough getting over there and trying to compete against bigger colleges and get that top spot,” Gordon said. “I want to let coach let me play the better kids to try to get me prepared to go on to East Central. Definitely playing some tournaments here and there to get ready.”

With the high school season set to start, though, Gordon enjoyed his moment during a signing ceremony Wednesday morning in Warren Central’s library. He’d signed already, but posed for photos and celebrated with his parents Heather and Shaun, and coach Steve Summers as the journey that started in fifth grade took a big step toward college.

“Thanks to Coach Summers for always pushing me, and Coach (Jeff) Pilgrim for being a good influence. He was a teacher and a coach and he always got me out there playing,” Gordon said.