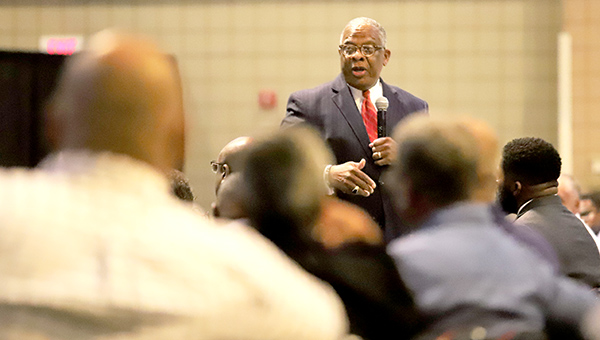 Vicksburg is not getting its money’s worth for its marketing investment, and the agencies involved need to consider consolidating their efforts to develop a more efficient strategy, Mayor George Flaggs Jr. said.

“I’ve been looking at some studies, I’ve looked at numbers of what we, the city and county pay in terms of marketing and advertising this area,” Flaggs said at Monday’s meeting of the Board of Mayor and Aldermen.

“I would love to challenge the city and county, Main Street and the Convention and Visitors Bureau, sports complex and the (Vicksburg) convention center to look at how we can market Vicksburg more effectively,” he said.

He said the city should consider targeting marketing efforts to an area within an 80-mile radius of Vicksburg and see what that does for a while.

All the marketing data he has read, Flaggs said, indicates Vicksburg’s target area is within an average of 80 miles of the city for shopping and tourism, with Monroe, La., on one side and the area east of Jackson on the other.

The secondary market, he said, would be areas that are about 3.5-hour drive or longer from the city.

“We want to look at how we can reduce the cost marketing the city, and consolidation doesn’t mean people or organizations; it can also mean funding,” Flaggs said Friday.

After looking at the marketing budget for the city and the county, he believes the city and county are overextending their market reach.

“Because of that, we don’t have enough benchmarks in our market budgets; all we’re doing is budgeting with no accountability. We’re not all measuring the same performance at the same time and the same way,” he said. “I’m talking about anybody and everybody that has a marketing budget.”

Flaggs said there needs to be more collaboration and planning between the organizations to determine the area’s immediate market.

“I’m not saying we can’t extend our reach, but at the time being we need to reduce our reach and increase the participation of the market, and then we can evaluate and start moving out.

“If they’re not coming from Chicago to the convention center, to Vicksburg, the military park, downtown or to anywhere in Vicksburg, why should we spend the money on Chicago?”

Flaggs said he believes all the entities involved in marketing the city need to meet and develop a marketing strategy for the area.

“Anybody who spends one dime on marketing should be at the table,” he said.