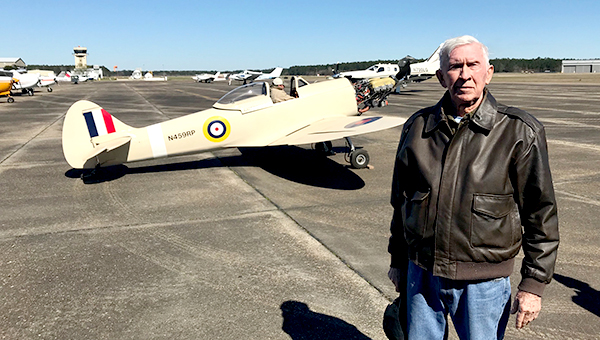 MOUND, La. — The Southern Heritage Air Museum will soon be getting a new addition with a unique history.

The plane is a Sport Spitfire, also known as an Issacs Spitfire, a homebuilt aircraft that will be reworked to serve as a replica of a British Supermarine Mark XVI Spitfire. It was donated to the museum by Hammond, La., resident William Pratt.

“The Isaacs Spitfire was a kit plane designed by John Isaacs, an employee at (Spitfire manufacturer) Supermarine (Aircraft) and one of the designers of the Spitfire,” said Southern Heritage Air Foundation founder Dan Fordice.

He said the kit, designed by Isaacs, was shipped from England to Pratt’s home, and he built the plane in his garage.

“Most kit planes include the parts for the airplane, but all Mr. Pratt received was a set of plans,” Fordice said. “He had to manufacture all the parts. It took him 10-15 years to build it.”

Although the plane is 1/60th the size of the original British fighter, its cockpit was kept the same size as the Spitfire to accommodate the pilot.

Foundation president Patty Mekus said Pratt, who is 86, offered the plane to the foundation because he was no longer able to fly it.

“What we’re going to do is fabricate a new nose to make it look more like the nose of a Spitfire,” she said, adding the plane will be repainted to match the scheme of the Mark XVI Spitfire.

When the plane arrives and the changes are made, Mekus said, its engine and landing gear will be removed and it will be suspended from the ceiling in the foundation’s hangar as a display.