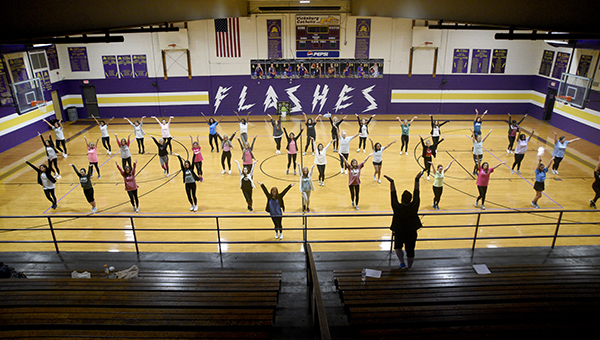 Orientations were held for all who are vying for their respective titles. There were also dance rehearsals and a Petite Magnolia Princesses crowning.

In addition to a full weekend for the women who will be competing, board members from the Miss Mississippi Corporation, as well as volunteers with the organization, were also on hand to make sure everything ran smoothly.

Nancy Robertson, who is serving as the executive producer for this year’s Miss Mississippi Competition, was up early Saturday morning for dance rehearsals that were held at the St. Aloysius gym.

Robertson is a newcomer to the Miss Mississippi organization, however, she is not a rookie when it comes to putting on a show.

Robertson has more than 40 years of experience as a choral educator that has included directing countless numbers of musical productions and choral concerts.

And while she admits she has never done anything like producing the Miss Mississippi Competition, she said there are similarities, which include production themes, music rehearsals, staging, choreography and a show that is offered to a large, supportive audience.

“The two major differences here,” she said, “Are that there will be a competition for a crown and scholarships, and on Saturday evening (the last day of the Miss Mississippi Competition) we will be televised live.”

The theme for the 2020 Miss Mississippi Competition is entitled “Bold, Brave and Beautiful.”

“We will be celebrating our candidates as they are bold in demonstrating their talent, brave in sharing their social impact statement and beautiful — both inside and out,” Robertson said.

Forty-one contestants will be vying for the Miss Mississippi crown, and although the Miss America Organization has made some changes to the competition, Robertson said, the production of the state competition has not been altered significantly.

“For the most part, the show will look the same,” Robertson said, adding, “We feel that we have planned a very exciting and entertaining production.”

Like Robertson, Tillotson is a music educator and has also been involved in musical and choral productions.

This will also mark her fourth year as the executive producer of the Miss Mississippi’s Outstanding Teen Pageant.

Tillotson said the theme for this year’s teen pageant is “From Broadway Lights to River City Nights” and will include musical selections from different Broadway musicals.

Serving as Tillotson’s co-producer is Robertson.

Both women have worked together as a team on countless projects and productions for many years.

“I am so excited about having my dear friend, Nancy Robertson, as co-producer this year,” Tillotson said, with Robertson mimicking Tillotson’s enthusiasm.

“I am very excited about Jennifer co-producing the Miss Mississippi Competition,” she said.

Both Robertson and Tillotson praised the number of volunteers who work with the organization.

“People really don’t realize how many volunteers it takes to make this event a success each and every year,” Robertson said.

And for those who may want to get involved with the Miss Mississippi Organization, Tillotson said, “All it takes is a willingness to help wherever is needed.”