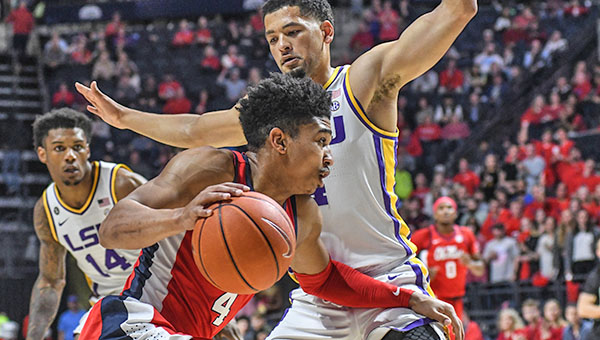 OXFORD — The best week of the Southeastern Conference season for Ole Miss landed one of its players the league’s top weekly honor.

Ole Miss guard Breein Tyree was named the SEC’s men’s basketball Player of the Week on Monday after leading the Rebels to a pair of victories.

Tyree was the team’s leading scorer in both contests, and continues to lead the conference in scoring during SEC play at 22.8 ppg. He’s averaging 19.0 points per game overall.

Tyree’s big week helped the Rebels (12-11, 3-7 SEC) to finally gain some traction in the SEC standings. They won back-to-back games for the first time since December — both by double digits — and three of five overall.

Tyree scored 23 points in Saturday’s 68-51 win over Florida, and was one of four Ole Miss players with nine points or more.

“Biggest difference is now we’re guarding on the other end. Some of that, maybe offensive lapses, but we were getting stop after stop, and Breein just put us on his back,” Ole Miss coach Kermit Davis said after Saturday’s win. “Now we’re just getting multiple scorers. Today we had three in double figures, almost four. Four or five guys in the scoring column, that balance helps you get off of those three and four pieces of games where you can’t score.”

Ole Miss will finish a three-game homestand on Tuesday when archrival Mississippi State comes to The Pavilion.

Mississippi State (15-8, 6-4) has won six of its last eight games, including an 80-70 win over Vanderbilt on Saturday. Three of its next four games are on the road.