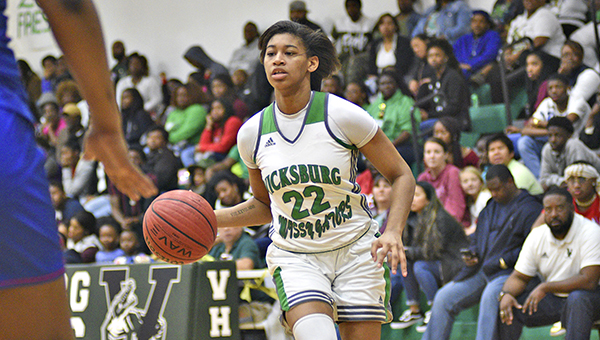 Karmen Davenport (22) and the Vicksburg Missy Gators will face Ridgeland in the MHSAA Region 4-5A tournament Tuesday in Jackson. (Courtland Wells/The Vicksburg Post)

Vicksburg High’s basketball teams have not had a lot of trouble reaching their region tournament championship games in recent years. They’ve just had trouble winning it.

Both Vicksburg teams will face Ridgeland in the opening round of the MHSAA Region 4-5A tournament Tuesday at Northwest Jackson Middle School. The girls play at 6 p.m. and the boys at 7:30.

“For me, personally, it would mean the things we’re doing are working. For the girls, it means all the hard work and dedication is paying off,” Missy Gators coach Troy Stewart said of the idea of winning a region championship. “It’s time to break through.”

The Missy Gators (16-10) have not won their region tournament since 1999. They’ll enter this time as the No. 2 seed and having lost three of their last four, although Stewart said he was far from discouraged by the recent slump.

The last two losses came against two of the state’s best teams, Clinton and Brookhaven. In the latter, a 63-61 setback on Friday, the Missy Gators missed a shot in the final seconds that would have sent the game to overtime. Stewart said it showed his team is capable of competing with the best and making a deep run in the Class 5A playoffs.

“If we play the way we played last week, we should be able to do what we need to do. Even in our losses we played extremely well,” Stewart said. “We played the No. 1 team in 5A and we lost by two and had an opportunity to win in the last 10 seconds. I think we’re peaking at the right time, and have got the pieces of the puzzle put together.”

Ridgeland (13-14) has a mediocre record but has given the Missy Gators fits. The teams split two meetings this season, with each winning on the road. The two games were decided by a total of seven points.

Stewart said the teams play contrasting styles, which has led to the close games. Vicksburg likes to run and use defense to generate offense. Ridgeland employs a slower half-court style. Whichever one can push the tempo toward its liking, Stewart said, will likely be the one that comes out on top.

“We played them well both times. They make us play a different style of basketball than we like. They sit in a zone and force us to play slower,” Stewart said. “We’ve been working since Saturday to speed the game up.”

Vicksburg (18-8) and Ridgeland (15-12) have taken a similar path to their first-round matchup in the boys’ tournament. Vicksburg won both meetings, by 10 and eight points, but had to work hard for both victories.

“For some reason Ridgeland plays us harder than anybody else they play. You can see it on video. They give it a little extra when they play us,” VHS boys coach Kelvin Carter said with a laugh. “We’ve got to come to play. It’s hard to beat anybody three times.”

The winner of Tuesday’s semifinal earns a berth in the Class 5A state tournament and will take on either Callaway (19-5) or Provine (13-14) in the region championship game on Friday night.

Callaway has won its region title three years in a row. One of those came when it was in Class 6A in 2017, but for the last two it went through Vicksburg in the championship game. Carter said there was more respect than fear of Callaway’s dominance, but did not hesitate to admit that avoiding them in the first round was a win for both his team and Ridgeland.

“They’ve been such a great team each year, they’ve done so much, that when you’re matched up with them early you’re almost jumping into the consolation game. They’re a tough out, especially in their environment,” Carter said.

That said, the Gators are coming into this week hot. They’ve won seven out of eight, with the one loss a 61-60 setback last week against Class 6A Clinton. The Gators finished the regular season by crushing Brookhaven 93-57 on Friday. They scored 36 points in the first quarter and led 57-24 at halftime.

It was exactly the kind of performance Carter wanted from his team to head into the postseason on, and the kind that inspires confidence that the Gators can be a factor not just in the region tournament but the state playoffs as well.

“The other 26 games are basically to get ready for the real season, and the real season starts Tuesday,” Carter said. “It’s a golden opportunity. We’ve been second each year, and at some point we’re going to get over that hump.”