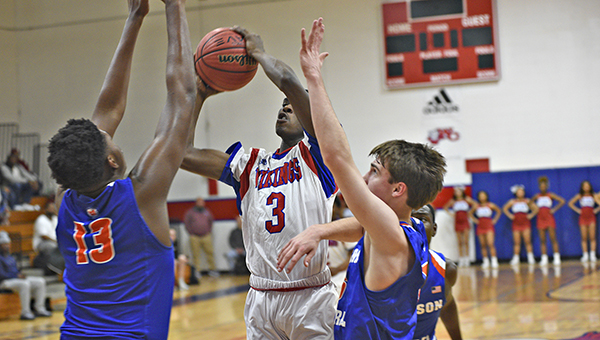 Warren Central's Anthony Lumpkin (3) goes up for a shot against Madison Central on Friday. Warren Central won, 57-54, to earn the No. 3 seed in this week’s Region 4-6A tournament in Jackson. (Courtland Wells/The Vicksburg Post)

When the Warren Central Vikings reached their holiday break, they were five games over .500 and looking like a team capable of making a deep playoff run.

Since they, they’ve only won twice in 10 games. Even so, all things considered, it could be a lot worse.

Warren Central’s two wins in 2020 were both against Region 4-6A opponents, including a 57-54 come-from-behind victory in Friday’s regular-season finale against Madison Central. That earned it the No. 3 seed in the boys’ region tournament, what coach Bruce Robinson considers a favorable first-round matchup with Murrah, and a fresh start as the postseason begins this week.

“Next week is a different beast. Records are out the window,” Robinson said. “Everybody’s been preparing. Our district is so close and even, we’re just going to go and try to win a district tournament or at least get in the championship again. If we can do that, that’s three out of four years and that’s something to hang your hat on no matter what your season record and how dismal it was.”

Warren Central (12-13) will play No. 2 seed Murrah (15-10) in the first round Tuesday at 7:30 p.m. Murrah is hosting the Region 4-6A tournament, but Robinson said homecourt advantage might not be worth as much in this particular matchup.

Warren Central is 4-2 against Murrah over the last three seasons, and they split two regular-season meetings this season.

“We beat them once. We’ve played good and been successful in JPS gyms. We’re familiar with them,” Robinson said. “We played them three times last year and we weren’t even in the district with them. We know them. With that being said, they know us also. That makes it a favorable matchup.”

Clinton and Madison Central played in the other Region 4-6A boys’ semifinal late Monday night. The semifinal winners play in the championship game Friday at 8:30 p.m., while the losers play in the consolation game at 5:30.

The top three teams from each region advance to the MHSAA Class 6A playoffs, so the consolation game also serves as a state playoff elimination game. Robinson said that, besides the obvious reward of a championship opportunity, winning in the first round takes a lot of pressure off by ensuring a state playoff berth.

Warren Central has reached the Class 6A tournament each of the past three seasons.

In the Region 4-6A girls’ tournament, Warren Central (8-13) wound up as the No. 4 seed and faced top-seeded Clinton (20-4) on Monday. Murrah and Madison Central play in the other semifinal Tuesday at 6 p.m.

Warren Central has lost 10 games in a row — its last victory was on Dec. 13 against Lanier — and needs to win one of two games in the region tournament to extend its season. Coach Darein Hilliard bristled a bit when asked if splitting and surviving was the plan, though.

“We want to win both of them,” Hilliard said.

Like the boys’ team, the Lady Vikes are mostly treating the region tournament as a fresh start. They’ve been competitive in a couple of recent games — they only trailed Vicksburg by three points heading into the fourth quarter, and led Madison Central at halftime on Friday before eventually losing 48-34 — and are hoping to put it all together at least once this week.

“You can go out there and anything can happen. We’re just going to go out there and be prepared. People saw that we were prepared (Friday),” Hilliard said. “The issue is, you have to prepare every day. You have to coach every play when you have a team as young as this. They’re going to have breakdowns, and you have to find a way to fight through it. We’re just hoping we can get that one game that gets us in, whether it’s Monday or it’s Friday.”