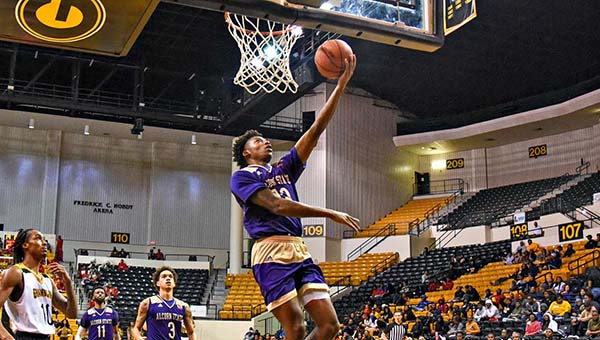 A couple of weeks ago, Alcorn State’s 3-point shooting was red hot and so were the Braves. They made 42 percent of their shots from distance during a five-game winning streak and rocketed up the Southwestern Athletic Conference’s men’s basketball standings.

As mid-February approaches, both the shooting and the Braves have cooled off considerably.

Alcorn made just 5 of 26 shots from 3-point range in an 80-71 loss to Grambling on Monday. It was Alcorn’s third consecutive defeat — all by nine points or more — and during the slide it is shooting only 18.9 percent (11-for-58) from 3-point range.

The Braves have also allowed 80 points or more in all three losses, after holding opponents to 73 or less during the winning streak that preceded it.

“We didn’t take control of the game when the opportunities were there for us. The goal for this game was to get six kills — a kill is when you get three stops in a row. We fell short of that with four kills, but we did put together some stops,” Alcorn coach Montez Robinson said after Monday’s loss. “We again didn’t capitalize offensively when we needed to. We had some open looks from three that we normally make but didn’t. Still, our guys fought and we had a chance to win this game despite being undermanned.”

The cold streak has pushed Alcorn State (10-12, 6-5 SWAC) down to sixth place in the 10-team conference. A two-game home stand against struggling Mississippi Valley State (2-9, 2-21) and Arkansas-Pine Bluff (2-9, 3-20) Saturday and next Monday might help the Braves get back on track, as will the return of a couple of key players.

Freshman Dominic Brewton filled in for Crosby and finished with 23 points on 8-of-11 shooting in his first career start. The Braves, though, were outrebounded 42-29 to go along with their poor 3-point shooting.

“It was tough not having those guys out there in the rotation, on top of the other injuries we’ve endured this season already. I thought our guys did well to play through it and kept the tempo up,” Robinson said. “The pace was in our favor and we had some open looks, the execution was there but we just didn’t capitalize. Our guys played tough and were physical, but were short-handed. We gave up too many offensive rebounds and too many second chance points. This game was right there for us.”