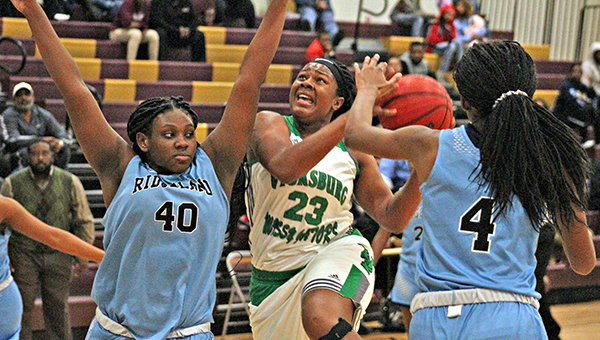 JACKSON — The Vicksburg Missy Gators took care of perhaps the easiest part of the postseason. The next step is one that has proven frustratingly difficult.

The Missy Gators scored the last six points of the game Tuesday night to get past Ridgeland, 50-44, in the semifinals of the MHSAA Region 4-5A girls’ basketball tournament. They advanced to the championship game for the third consecutive season and fifth time in seven years.

Vicksburg’s last region championship, however, came in 1999. It’s a generation-long drought that they’re eager to end.

“We’re tired of being the bridesmaid. It’s time to try to be the bride,” Vicksburg coach Troy Stewart said. “Getting to the game (is easy). Now the big challenge is going to be winning it.”

Vicksburg won both meetings with Callaway this season — and five in a row dating to last season — but Stewart cautioned that keeping that streak alive would not be easy.

“We’re not happy because they’re the home team. But I am happy because we have a good history with them. This year we found a way to win each one of them. We have to go back and find a way to win again. It’s extremely difficult to beat a team more than twice,” Stewart said.

Getting past Ridgeland was not a simple task, either. The Lady Titans successfully slowed the game to a crawl and kept it close and low-scoring, trailing 20-19 at halftime and 33-28 heading into the fourth quarter.

Vicksburg looked poised to put the game away midway through the fourth quarter after a 10-0 run gave it a 43-32 lead. Ridgeland chipped away, however, and tied it at 44 on a pair of free throws by Xzeria Denson with 1:54 remaining.

Those were the last points the Lady Titans scored. They missed their last three shots from the field and committed one turnover on an offensive foul in the final stretch. Yakia Burns hit a long jumper with 1:20 to go to put the Missy Gators in front for good. Burns and Layla Carter also hit two free throws apiece in the final minute to put the game out of reach.

Kymtaeshia Snow made four 3-pointers and led Ridgeland with a game-high 14 points.

“The style of play changed. When they get going to the line and won’t let us push, that happens. We weren’t getting rebounds and we can’t get out and run. What got us the lead was the press. When they stop the ball and can’t press, we couldn’t get the ball back,” Stewart said. “I’m proud that we persevered, and that we found a way to win the game. We know if we get to the line we’ve got a pretty good shot of taking care of it. I tried to get it into the free throw shooters’ hands and we did a good job of that. That made me have confidence we could pull back out because (Ridgeland) was in a situation where they had to foul.”