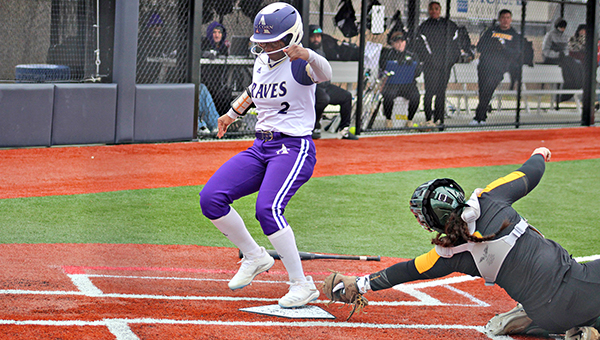 Alcorn State’s Desirea Lindsey (2) scores just ahead of the tag of Kentucky State catcher Sidney Campbell during the second game of a softball doubleheader at Sports Force Parks on the Mississippi on Thursday. Lindsey had three hits and scored three runs as the Lady Braves won 14-4 to complete the sweep. They won 14-1 in game one. (Ernest Bowker/The Vicksburg Post)

Alcorn State’s long softball weekend in Vicksburg isn’t so much about results, as it is just getting to play games and get live-action reps early in the season.

Even so, a couple of blowout victories never hurt anybody.

Alcorn State banged out 21 hits and scored 28 runs — four times its total from its five previous games combined — to sweep a doubleheader from Kentucky State at Sports Force Parks on the Mississippi on Thursday. The Lady Braves won the first game 14-1, and the second 14-4, on a cold and windy afternoon.

“As a coach you want to be mentally tough, but the reality of it is it’s cold out here,” Alcorn coach Josef Rankin said with a laugh. “So I was very proud of them for coming out here and really responding to that. In spite of the cold, we still swung the bats well and scored some runs and really put ourselves in a position to where we weren’t as tight at the plate. We’ve been struggling scoring runs the first few games. It was good for us to get some confidence and score a few runs.”

Thursday’s doubleheader was the first of four in a row for Alcorn (3-4). It will co-host the River City Classic tournament with Jackson State at Sports Force Parks this weekend, and will play twice each on Friday, Saturday and Sunday.

Friday’s split doubleheader begins at 1 p.m. against Jarvis Christian, and the second game is at 6 against Southern Illinois-Edwardsville.

Rankin said the Lady Braves’ practice time has been so limited because of wet weather this winter that any time they can actually get on the field is welcome.

“We lost so many days in January, so even once we started last weekend those were our scrimmages. The hitting is going to come. It’s just more reps for us to see live pitching,” Rankin said. “This will probably be the first time since we’ve come back from Christmas that we’ve had this many days consecutively that we’ll be on the field. We’re looking forward to getting two more tomorrow.”

Rankin also added that it will be tricky to manage the roster this weekend with so many games in so short a time. After the tournament at Sports Force Parks, Alcorn will play a doubleheader Wednesday at Southern Miss and five games next weekend at the Southeastern Louisiana Tournament.

In all, Alcorn has 25 games scheduled between Feb. 8 and March 1.

“We used a good bit of people today, and we’ll continue to try to do that to really manage it. Even the whole month of February we’ve got quite a few games. You really don’t want to burn people out on the front end,” Rankin said. “Hopefully you can develop depth from it and give them these opportunities early to see who you can count on.”
Thursday’s doubleheader sweep certainly got the weekend off to a nice start.

In game one, pitchers Ambria Dorsey and Kiri Parker combined on a two-hitter and the Lady Braves’ lineup backed them with 12 hits in a 14-1 victory.

Simone McKinney, Amari Ramsey, Brittney Triplett and Malea Dickerson each had two hits. Dickerson drove in two runs and scored twice, and Ramsey had three RBIs. Triplett hit a two-run single and scored on a triple by Kelsey Lockridge during an 11-run second inning that blew it open.

Alcorn used a more steady approach in game two. It scored five runs in the first inning, four each in the second and third, and one more in the fourth to earn a 14-4 run-rule victory.

Lockridge, a former Warren Central standout, was the hitting star in game two. She went 2-for-4 with a triple, three RBIs and two runs scored. In the doubleheader, the freshman infielder was 3-for-6 with two triples, four RBIs and five runs scored.

Her second triple came in front of her old Warren Central teammates and coaches who had popped in to watch the game before going to another field at Sports Force Parks for their own practice.

“I got to see my old teammates and my coach, and it was a good atmosphere getting to play with my new team in my hometown. It was fun. I enjoyed it,” Lockridge said. “We’re still finding our way, but we’re doing good right now. Today was a good eye-opener for us. We’ve just got to keep pushing.”