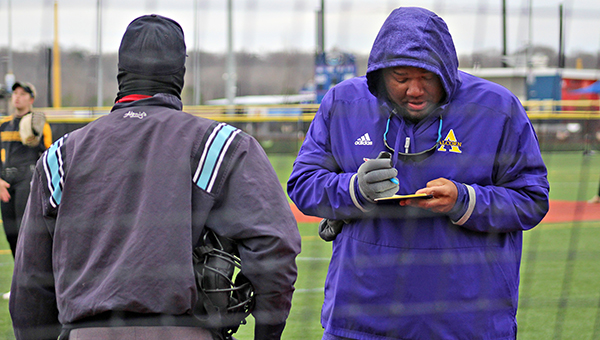 Slowly but surely, the buses started rolling into the parking lot at Sports Force Parks on the Mississippi on Thursday afternoon. Adorned with names and logos from various high schools and colleges, their arrival marked the first wave of a busy weekend at Vicksburg’s year-old sports complex.

Sports Force Parks will play host to 33 baseball and softball games over a four-day span, ranging from high school to junior college and Division I.

“It’s crazy, but it’s fun. It’s a fun environment. Especially for our kids, because they don’t get to see this a whole lot,” Warren Central softball coach Dana McGivney said Thursday, as she watched Alcorn State and Kentucky State play a college softball doubleheader at Sports Force Parks. “I think it’s exciting for Vicksburg to have something like this. They had it last year, but this year it seems to be a little bit more involved with all of the schools coming out.”

The Alcorn-Kentucky State softball games were the first events on the busy weekend schedule. Simultaneously, however, Coahoma Community College and Frontier Community College were playing a junior college baseball game on another field at SFP. Later in the afternoon, Central Hinds Academy and Riverfield Academy played a high school baseball game that was moved there from Central Hinds’ campus in Raymond because of wet field conditions.

Those events were only the opening act, though, for what’s ahead in the next three days:

• On Saturday, Warren Central’s baseball team will be joined by Brandon and Northwest Rankin for a preseason baseball jamboree beginning at 10:30 a.m. The teams will play a series of five-inning varsity and junior varsity scrimmages against each other throughout that day.

Vicksburg plays Clinton at 11 a.m., and then Clinton plays Ridgeland immediately afterward.
Warren Central will play two five-inning scrimmages against Florence at 11 a.m. and 1 p.m., with a junior varsity game in between.

Both softball jamborees were the result of wet field conditions at other places.

Vicksburg’s was moved to Sports Force Parks from Clinton, while Warren Central and Florence arranged theirs when it looked like their original destination of Lake High School would be unplayable.

Sports Force Parks has all artificial turf fields and, with a dry forecast for the weekend, soggy grass is not a problem.

“I was real worried it was going to get rained out, and since we were able to get a field here and we knew we would be guaranteed to get to play, us and Florence just decided to play here,” McGivney said.

• The main event of the weekend at Sports Force Parks is the River City Classic softball tournament. Seven Division I college softball teams will come to the complex over three days for a series of mixed doubleheaders.

Alcorn’s doubleheader against Kentucky State on Thursday was not part of the tournament. It was originally scheduled to be played in Lorman, but moved to Vicksburg because of wet field conditions. Either way, Alcorn coach Josef Rankin said he was happy to bring his team north and show it off to fans in the River City.

“It’s within the community, so we just want to do whatever we can for people to be able to see what we have as a softball program,” Rankin said.