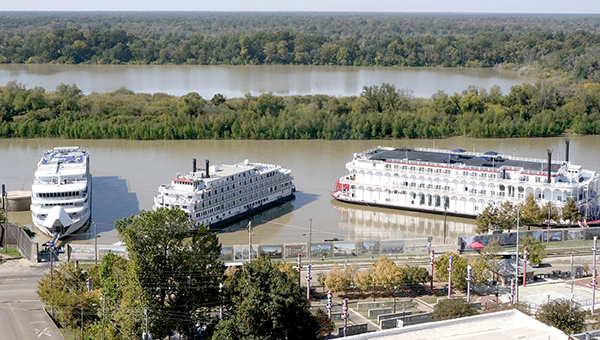 The Board of Mayor and Aldermen and American Cruise Lines have agreed to a 20-year lease involving a portion of the city’s waterfront to allow the company to build a dock for its boats visiting Vicksburg.

The board approved the agreement at a special called meeting Thursday. American secured the lease with a $5,000 down payment that was delivered Thursday morning to the city. The lease includes an optional five-year extension.

“We’re (American) very pleased and excited to be a part of the waterfront development and appreciate the way the city board and personnel have worked with us to reach this point of entering into this agreement to lease,” said attorney Blake Teller, who represents American Cruise Lines.

Teller said American’s 2020 schedule calls for 100 stops in Vicksburg by its boats.

The section of waterfront leased by American inside the floodwall runs from the China Street entrance north to the Yazoo and Mississippi Valley Railroad Depot. The lease will be paid through an annual docking fee of $2 per passenger traveling on each cruise.

Under the lease, the company agrees to spend at least $200,000 in improvements in the first year of the lease. Those improvements include sidewalks, park benches and landscaping.

Flaggs said the city has an $11 million plan to improve the riverfront area, but that project depends on whether the city will be able to levy a 1 percent sales tax for capital improvements.

The board Monday approved a resolution asking the Legislature to pass a local and private, or special, bill to call a public referendum on the tax, which will be held with the municipal general elections in 2021.

“If we can get the 1 percent sales tax, we intend to start along with the private development and do a public development,” Flaggs said, adding the city has approval from the Mississippi Department of Transportation to rework the parking on Levee Street.

“I think this is the beginning of a riverfront development like never before, and an opportunity for Vicksburg to not only showcase, but be a site and truly a tourist destination,” he said.

South Ward Alderman Alex Monsour said the lease is the result of the board’s work to make Vicksburg a tourist destination.

“You have to invest in your city to attract people here, and that is now what is happening in Vicksburg,” he said.