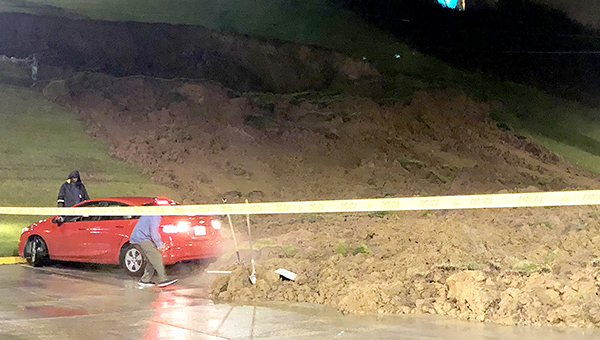 Employees at Waterview Casino help remove a car that had gotten stuck Wednesday evening in dirt and from a landslide that occurred earlier in the evening. A large portion of a hill near the casino's main parking lot let loose late Wednesday, covering much of the parking lot. No cars were damaged and no one was injured. (Terri Cowart Frazier/The Vicksburg Post)

A hill softened by three days of rain collapsed Thursday morning, sending the large portion of a vacant lot cascading down on a dead-end section of China Street and covering a car on China with trees.

The slide occurred between the buildings at 1108 and 1114 Farmer St.

Property owner Sylvester Walker said the property was level and then gently sloped toward China Street.

He said his brother, L.T. Walker, who lives across the street from the site, called about the slide.

“He said he heard a crackling noise and got out of bed to look,” Walker said. He said a car and a trailer on the property had to be removed by a wrecker. The car was on the edge of the slide area, he said, and the trailer was on the bottom of the hill.

The slide was one of many in Vicksburg and Warren County caused by the rains.

According to the National Weather Service Office in Jackson, 6.38 inches of rain fell in the area Monday through Wednesday, causing ground already soaked by earlier rains to give way in several areas.

The largest slide occurred Wednesday about 7:30 p.m. when a landslide at Waterview Casino covered the street and a large part of the casino’s parking lot. Officials with the casino said crews from Miller Construction Co. were on the scene Thursday cleaning the area.

“Those are the two (roads) we’ve had the worst mudslides on,” he said.

He said a downed tree blocked a section of Old Highway 27.

Inside the city, officials closed Riverfront Park after a landslide moving toward the Mississippi River was discovered Wednesday.

South Ward Alderman Alex Monsour, who is over recreation, said the slide near the park’s playground area has caused the ground around it to shift on the inside of the perimeter fence between the park and the river.

“It’s unsafe for anyone to be in there, and that’s one of the reasons we closed it,” he said. “You can see the ripple effect on the ground, and we don’t want anybody out there.”

North Ward Alderman Michael Mayfield said a section of a hillside in the Hills of the Valley is starting to slough off, and there are several areas north of the Klondyke on North Washington Street that are in danger of sliding.

Mayfield said another area on Stirgus Street near Confederate Avenue has washed out and exposed a waterline and may threaten the street.

“This one’s going to be nasty,” he said. “If we get more rain, we’re going to have some problems in several areas.”