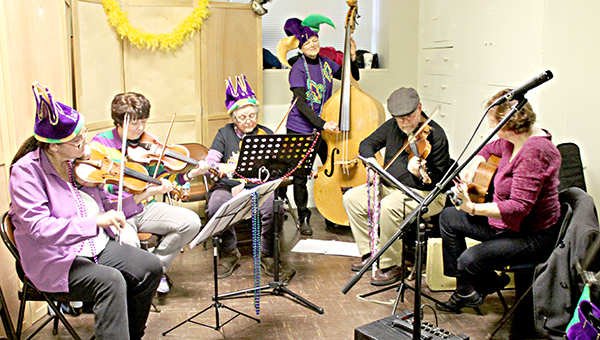 During the Shrove Tuesday festivities at Christ Episcopal Church, 1115 Main St., in 2017, music was provided to those who attended. (File Photo/The Vicksburg Post)

Christ Episcopal Church, 1115 Main St., and St. Mary’s Episcopal Church, 900 1st North St., will hold their annual suppers to give local residents a chance for one final feast before the season of Lent begins the next day with Ash Wednesday.

Christ Episcopal members will hold their pancake and sausage supper from 5 to 7:30 p.m. at the church parish hall. Tickets are $10 for adults and $5 for children and are available from church members or at the church. People can dine-in at the church or take the meals out.

Besides pancakes, soups, gumbos, breads, blueberry bread, cakes, pies and other items will be sold during the supper. Music will be provided by the Dirty Rice Burners band.

St. Mary’s dinner of pancakes, sausage, eggs and grits will be served from 5 to 7 p.m. at the church hall. Tickets are $6 and people can eat in or get orders to go.

Shrove Tuesday, or Fat Tuesday is the time when Christians observe a final day of feasting and revelry before the fasting and sacrifice of Lent to prepare for Christ’s resurrection on Easter Sunday.

The suppers honor a custom that dates back to the Middle Ages, when then as now, foods like meats, fats, eggs, milk, and fish were regarded as restricted during Lent. Many families would have big feasts on Shrove Tuesday to consume the items that would inevitably become spoiled during the next 40 days of Lent.

The English tradition of eating pancakes on Shrove Tuesday came as a way to use as much milk, fats, and eggs as possible before Ash Wednesday began.

The term “Fat Tuesday,” or “Mardi Gras,” involved the French custom of eating of all fats and fatty foods on Shrove Tuesday.

Christ Episcopal’s supper has been a church tradition for 126 years.

Godfrey said all the proceeds from the supper go to the church’s community outreach, which benefits local agencies.

“The main thing to me is it all goes to ministry,” he said. “We sit down in March and we divide the money to various ministries. Some in the diocese, but most of it stays in Vicksburg.”