Bulldogs, Rebels are on opposite ends of streaks 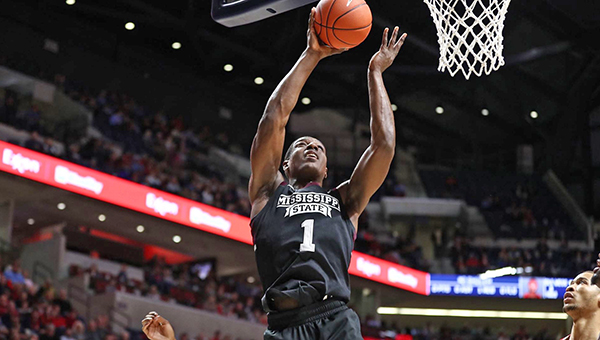 There is an odd flip side to streaks in sports. Once they end, just as quickly and without notice they often turn in the opposite direction.

It’s a strange phenomenon both Mississippi State and Ole Miss are dealing with as they prepare for conference road games on Saturday.

Mississippi State (15-9, 6-5 SEC), which entered February as one of the hottest teams in the Southeastern Conference, has suddenly lost two of its last three.

“In our league, you’re never out of it when you’ve got 10 or 12 games to go. There are many great opportunities for quad one and quad two wins. We have a long way to go,” Ole Miss coach Kermit Davis said after an 83-58 blowout of Mississippi State on Tuesday. “Obviously tough, but we’ve got a great opportunity on Saturday at Kentucky. You keep having these great opportunities. We’re going to keep that mantra of winning February.”

Ole Miss’ surge has been spearheaded by senior guard Breein Tyree. The reigning SEC Player of the Week scored 40 points in the win over Mississippi State. During the Rebels’ three-game winning streak he is averaging 27.0 points per game while shooting 53.2 percent from the field and 52.3 percent (11-for-21) from 3-point range.

“I don’t remember a guy like that as a guard who can just go and get 40,” Davis said of Tyree. “He scored at every level, at the rim, step back from three. I’ve been coaching a long time, and that’s probably the best I’ve ever seen.”

Mississippi State, meanwhile, has its own high scorer with sophomore forward Reggie Perry, but has not had similar team success recently.

Perry has scored 20 or more points in four of the last seven games — he had 24 against Ole Miss — but the Bulldogs have only shot 36.8 percent as a team in their recent losses to Kentucky and Ole Miss. They were 2-for-16 from 3-point range and committed 17 turnovers in the loss to the Rebels.

“That pain that you deal with has to drive you to come back and really come together and give our best effort the remainder of the way, including this week in a very important game that we have Saturday,” Mississippi State coach Ben Howland said after the loss to Ole Miss. “It just keeps coming. We have to bounce back. We can’t let this loss beat us twice.”

Mississippi State also can’t afford to let a two-week slump turn into a full-blown collapse. It is No. 51 in the NCAA’s NET Rankings that help determine NCAA Tournament berths.

That would put the Bulldogs on the bubble heading into the final month of the regular season. Eight of their last 13 games are on the road. The trip to Arkansas is only the fifth of those.

Mississippi State is 11-2 at Humphrey Coliseum this season, and only 4-7 in road and neutral-site games.

“There is still a lot of basketball left. We can still get there,” Howland said after Tuesday’s loss. “We have to learn from this, put this behind us, and show up ready to go with our preparation for our next game.”