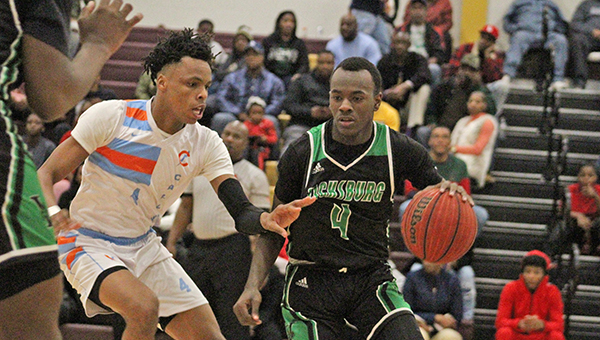 JACKSON — To achieve their ultimate goal, the Vicksburg Gators will probably have to see Callaway one more time this season.

For now, they’ve had more than their fill of the Chargers.

Daeshun Ruffin and Keivion Hunt each scored 17 points, and Callaway rolled past the Gators 63-49 on Friday to win the MHSAA Region 4-5A boys’ basketball tournament championship for the third consecutive season.

The silver lining for the Gators (19-9) is that their season is far from over. By finishing second in the region, they’ll host Grenada (13-15) in the first round of the Class 5A playoffs on Tuesday.

Callaway (21-5), which has not lost to a team from Mississippi this season, earned a first-round bye.

“We didn’t play Vicksburg Gator basketball, but we live to see another day. And we’re going home. And we’re pretty doggone good at home. So we’ll take that,” Carter said. “This game is water under the bridge, and we’ve just go to go back and get prepared for the next team.”

The Gators were amped up to face their longtime nemesis yet again, especially for a championship, but it didn’t take long to get more than they wanted.

Callaway scored the first eight points of the game and never trailed. Vicksburg’s outside shooting, so often its greatest strength, was ice cold in the first half. Callaway built a 16-point lead by halftime, and it swelled to as many as 23 midway through the third quarter.

“We turned the ball over excessively. We just couldn’t get in a groove, and it really hurt us that we couldn’t score at all early on,” Carter said. “I really don’t think it was a whole lot that they were doing. I think we probably were in our own heads. We’ve got to go back to the drawing board and work a little bit.”

The Gators did finally pull it together over the last quarter and a half. Some shots began to fall, and they chipped away at the deficit. A pair of 3-pointers by Cameron Butler and another by Sean Hardy got them within eight, at 57-49, with 2:10 remaining in the game.

That was all they had in the tank, though. Hunt made four free throws and Ruffin two over the next minute, and the Gators had two turnovers on the offensive end to put the game away. With the score at 63-49 and a minute to go, Carter backed his defense off the ball and allowed Callaway to dribble out the clock.

Butler, Peytin Jackson and Rickendrick Johnson each finished with 11 points to lead Vicksburg.

“I was happy with the second half. They came out and showed a lot of resilience,” Carter said. “(Callaway) is not No. 1 for no reason. They took Ruffin out for a long time, and those other guys can play. People don’t seem to give them credit. They’ve got a 6-8 in the middle and you can’t teach 6-8.”