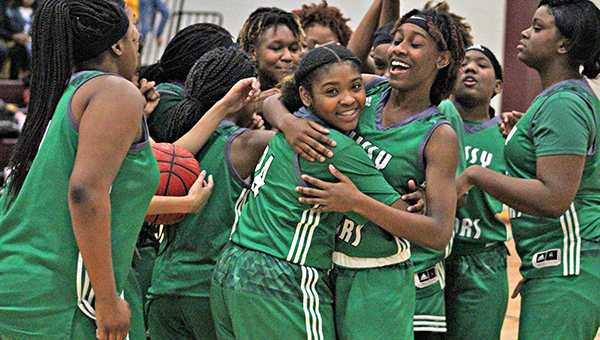 Vicksburg High basketball players Jana Colenburg (24) and Layla Carter hug each other as their teammates celebrate around them following the Missy Gators 60-43 victory over Callaway in the MHSAA Region 4-5A tournament championship game. (Ernest Bowker/The Vicksburg Post)

JACKSON — When the final buzzer sounded Friday night, the Vicksburg Missy Gators were ready to party like it’s 1999.

It is the Missy Gators’ first region championship since 1999, and came after they had lost in the title game four times in the past six years — and each of the last two seasons.

“Three years. Three years. We’ve been the runner-up twice. I’m glad we finally got over that hump. I didn’t (relax) until there was about four seconds left,” said VHS coach Troy Stewart, who is in his third season. “It feels good because you know the girls did play well and it ended solidly. We didn’t blow the lead that we had like we’ve been doing all year. So, to me, I see improvement and growth with the team so that going into this final stretch of the playoffs we’ve got a really good shot to get where we want to go.”

“I’m not sure if it’s the actual launching moment, but we do know that our route to the championship is a lot easier going this way than playing in the second-place game or the third-place game,” Stewart said.

The Missy Gators had reached the region tournament final in each of Stewart’s first two seasons but lost both times. Friday, in their third try, its never came close to happening again.

The Missy Gators had 20 steals in the game. They turned several of them in the second quarter into transition baskets and an 11-0 run that proved to be the difference. Vicksburg led 33-24 at halftime, and kept the lead between 12 and 19 points throughout the second half.

The only nitpick Stewart had was that they didn’t score more. The Missy Gators were 7-for-16 from 3-point range and 13-of-18 at the free throw line, but shot only 30 percent from the field overall.

“I really wanted us to convert a lot more of those steals that we got. In the third quarter I got to five, before I stopped counting, steals without points. I’d like to work on that when we get back to school,” Stewart said.

Even so, Stewart said he’s quite pleased with the way his team is playing heading into the state tournament. The Missy Gators were blown out by Clinton 10 days ago, but followed it up with a last-second loss to state power Brookhaven and two solid wins in the region tournament.

“This was another solid game for us all the way around,” Stewart said. “I think it started against Clinton. That game was a blessing in disguise because it forces you to understand how hard you have to work every game and what you need to look like every night. Since then, we’ve been playing lights out.”