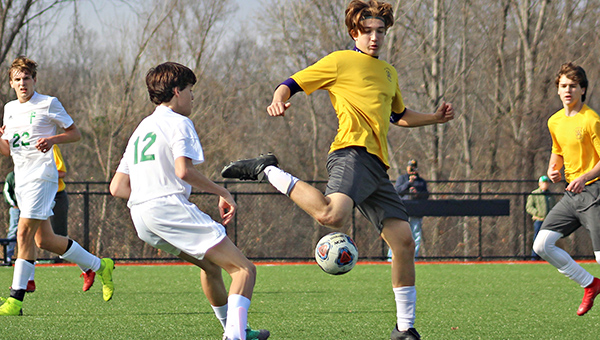 St. Aloysius’ Kieran Theriot, right, kicks at the ball as Cathedral’s Wesley Simpson (12) defends during a game in December. St. Al, a two-time-defending MAIS soccer state champion, will begin it quest for a threepeat Monday at 5:30 p.m. at Heritage Academy in the first round of the Division II playoffs. (Ernest Bowker/The Vicksburg Post)

The St. Aloysius Flashes know they were fortunate to qualify for the MAIS Division II boys’ soccer playoffs. A second-half slump put them in a situation where they needed a series of late-season results to fall their way, which they did.

Now that they’re in, however, the Flashes have a message for the rest of the bracket.

“They messed up letting us in,” senior goal keeper Haden Luke said.

The Flashes (10-5) will begin their quest for a third consecutive MAIS soccer championship on Monday, when they travel to Heritage Academy (5-4) for the first round. Kickoff is at 5:30 p.m.

It’s a rematch of last year’s Division III championship game, which St. Al won 2-0, and a matchup of two programs that might be flying under the radar a bit despite a resumé full of accomplishments and loads of potential.

Heritage has only played nine matches this season because of bad weather, and lost its regular-season finale to Starkville Academy. St. Al hit the Christmas break with a 7-2 record, but has only gone 3-3 since then.

St. Al’s slide took its playoff destiny out of its own hands, although it still was able to back in when Washington School beat Pillow Academy last Monday.

“Right before Christmas, this team would have beat anybody in the state. And then you take the break, and we’re like a slow engine getting going,” St. Al coach Jay Madison said. “I feel like we’re in a good spot. We didn’t play well in some games and that cost us in the district. We snuck in there as the second seed. One of the players said they messed up by letting us in this. They felt like we were gaining momentum moving forward. We’re glad to be going to Columbus, because the alternative is we’re going to play baseball.”

What St. Al lacks in momentum heading into the postseason, it makes up with a wealth of experience and confidence. Seven starters were part of last year’s state title run, and several of those were on both championship teams. Some of the ones who weren’t, like sophomore forward Cooper Madison, have stepped up and in to prominent roles.

Cooper Madison has scored in nearly every game this season and has formed a potent goal-scoring punch with Kieran Theriot. The two combined for all five of the team’s goals in a 5-2 win over Central Hinds in the regular-season finale last Monday.

“They’ve just been there before. Even some of the younger ones. Like (defender) Reed Bourne, he’s been starting three years and he’s only a junior,” Jay Madison said. “It’s just that experience. It may be one of those deals where we’re turning it on at the right time, and with that experience they know we did what we had to do, we got in the playoffs, and let’s go make a run.”

Luke, who is in his second season as St. Al’s starting keeper, agreed. Whatever problems the team had in January and early February, the start of the postseason brings a renewed sense of opportunity, he said.

“We’ve had so much adversity this year and I think we’ve been able to overcome it very well and not let it bother us at all. The playoffs for us is like starting over. We’re starting fresh, like it’s a brand new team,” Luke said. “We snuck in for sure. Something got in the way with us and we choked a little bit. We lost to a team we definitely could’ve blown out of the water and we almost didn’t make it to the playoffs. They messed up letting us in.”