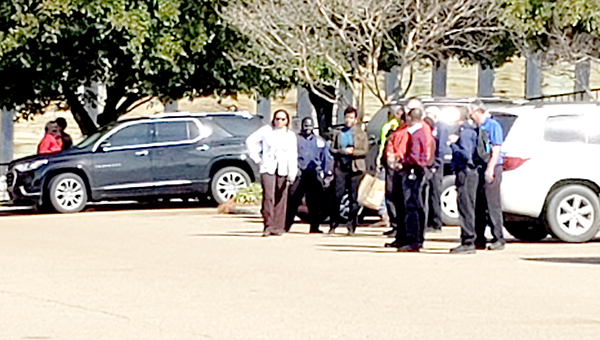 Employees with Ameristar Casino stand in the casino's parking lot after a bomb threat was called in Monday morning. (John Surratt/The Vicksburg Post)

Reports said the threat came in by phone to the casino who then contacted 911.

Ameristar Casino and Hotel General Manager Gerad Hardy would not give details of the threat but said Ameristar personnel and emergency units were treating it as a “credible threat.”

“The safety and security of our guests and team members is always our paramount concern,” Hardy said. “We received a threatening phone call and, out of an abundance of caution, worked with the police department to temporarily evacuate the facility to fully investigate the issue.

Mary Greer, a casino patron, said a casino employee “quietly told us there was a bomb threat and it was necessary to evacuate the building.

“It was very orderly; no one was pushing. Everyone was calm,” she said.

At this point, it is unclear as to how much of the company’s hotel and casino operations have been interrupted due to the threat.

At 12:30 p.m., police confirmed they had completed a sweep of the casino and were awaiting officials from the Mississippi Gaming Commission to arrive so they could authorize the casino to resume operations.

Operations at the casino resumed shortly after 3 p.m.

“Law enforcement officers, including detection dogs, have completed a sweep of the property and found nothing, and have given us the ‘all-clear’ to reopen,” Hardy said. “As this is an ongoing matter, we cannot offer any additional details at this time.”

Hardy said both the casino and the hotel were swept and cleared.