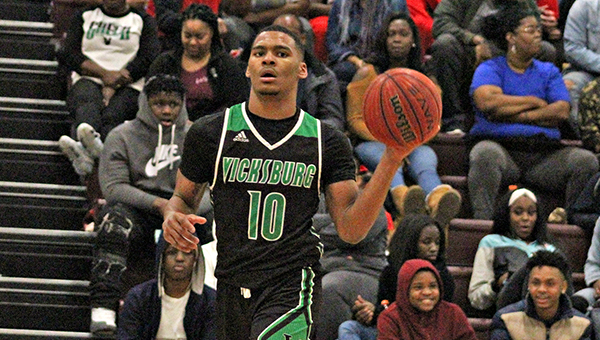 Winning a region championship would have been a welcome accomplishment for the Vicksburg Gators, on a number of levels. After they fell short, however, it didn’t take long to pivot to the next mission — winning a state championship.

The Gators (19-9) will host Grenada (13-15) in the first round of the MHSAA Class 5A boys’ basketball playoffs Tuesday at 6 p.m. It’s not only the first step on the road toward the program’s first state title since 2003, but also a chance to shake off a disappointing loss in the Region 4-5A tournament championship game on Friday.

“We didn’t play Vicksburg Gator basketball, but we live to see another day. And we’re going home. And we’re pretty doggone good at home. So we’ll take that,” Vicksburg coach Kelvin Carter said after his team lost 63-49 to Callaway on Friday. “This game is water under the bridge, and we’ve just got to go back and get prepared for the next team.”

Vicksburg has won eight of its last 10 games heading into the state tournament. It defeated Ridgeland 59-58 in the Region 4-5A semifinals to earn a home game, but missed a chance to also get a first-round bye when it lost to Callaway.

Callaway shot 48 percent from the field and built a 23-point lead midway through the third quarter. The Gators managed to chip the deficit to as little as eight with 2:10 remaining, but Callaway answered several small runs and was never seriously threatened.

The Chargers beat Vicksburg for the 17th time in 18 meetings since 2009, and for the third year in a row in the region tournament championship game.

Carter said the Gators have been in this position before and know how to handle it. They lost at home to Cleveland Central in the first round of last year’s state tournament, but reached the second round in 2017 and 2018.

The bigger challenge this week, he said, was pushing aside the disappointment of losing a game that so much emotional energy had been invested in.

“We’ve learned from it over the years, but you want to move forward,” Carter said. “You want to be able to put your foot on their necks and move past them. We’ve just got that Callaway arrow in our back. We’ve just got to keep pushing and one day hopefully we’ll get over the hump.”

The Gators can get another shot at Callaway if they both reach the state championship game in three weeks. To get there, though, the Gators will first have to win four other games beginning with a different set of Chargers.

The Grenada Chargers finished third in Region 2-5A after beating West Point 64-47 in the consolation game on Friday and have not won back-to-back games since mid-January. Even so, Carter cautioned, Grenada will not be an easy out.

Grenada is led by senior Jacoryan Jones (17.1 points, 2.8 assists per game) and junior Ty Moore. Moore is a 6-foot-5 forward averaging 12.2 points and 7.4 rebounds per game, which presents some matchup problems for the Gators.

Vicksburg has some height — three regular contributors are 6-foot-4 or taller — but is primarily driven by the outside shooting of guards Cameron Butler, Taylon Smith, Peytin Jackson and Sean Hardy. Vicksburg has shot 50 percent from 3-point range this season.