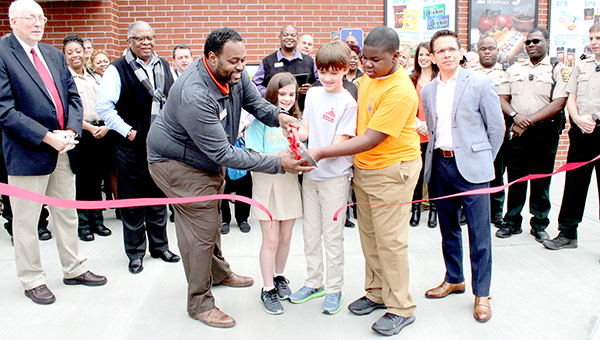 “We’re very excited about Love’s opening,” said Pablo Diaz, president and CEO of the Vicksburg-Warren Economic Development Partnership. “It answers a need, not only for truckers but also for all of the employees who are already at Ceres. One of the first things we heard when we started concentrating on Ceres three years ago was from the employees, who said there were very limited options for lunch, very limited options for other snacks.”

Looking at the business’ parking lot, Diaz commented on the traffic coming from Interstate 20 into Love’s.

Love’s will also open Ceres to other potential developers by providing exposure to the rest of the industrial park, he said.

“I think it’s definitely an important part (of Ceres),” Diaz said, “Because when we show the park to other companies, they will actually understand ‘they (the county) doesn’t only have the land and the workforce and the site ready to go, they also have everything we need for our trucks to come in and out without any delays.

“That’s really going to help us.”

When he came to Warren County three years ago, Diaz said, he believed the area had “what we needed to get the job done, and we certainly have a community that is pulling together forward with one clear vision. When you are organized like that, you’re going to have success.”

Love’s site general manager Quentin Ryland said the Flowers store is a Tier 1 store, and one of the largest in Mississippi.

“It’s very innovative; a lot of new things,” he said. “Our goal is to provide the best customer service possible.”

Ryland said the company does “a lot of fundraising.” He said Love’s will do a fundraiser for Blair Batson Children’s Hospital, and presented $2,000 to Bovina Elementary.

“We’re looking forward to a relationship we can build and things we can do to help them out and help the community,” Ryland said.