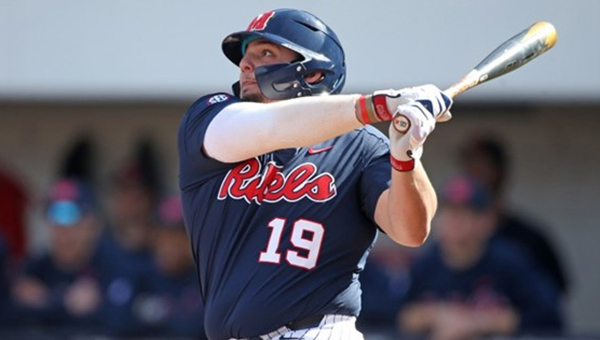 BIRMINGHAM, Ala. — It took just two games for Cael Baker to make his name known among Ole Miss baseball fans. And it took him just one weekend in the Southeastern Conference to earn his first SEC Co-Player of the Week honor.

The junior from Gahanna, Ohio, burst onto the scene with a two-home run game on Saturday, going 4-for-4 with two homers, a double and four RBIs. He became the first Rebel since Cody Overbeck in 2008 to have a multi-homer outing within the first two games of the season. He’s also the only player since at least 1997 to have a multi-homer game within his first two games as a Rebel.

He wasn’t quite as prolific on Sunday, going 1-for-4 with an RBI, but that one RBI proved to be the difference in the game and the series. Baker singled home Justin Bench to cap off a four-run seventh inning and give Ole Miss a 7-4 lead. The Rebels went on to hang on for a 7-6 win to capture the series victory.

Baker is no stranger to success at the plate or the accolades that come with it. He won the junior college triple crown at Wabash Valley College last year, batting .506/.596/1.051 with 101 RBIs, 25 home runs and 80 runs scored. For his efforts he was named the NJCAA Player of the Year.

MSU’s MacLeod named
SEC Freshman of Week
STARKVILLE — Mississippi State announced that it has canceled Tuesday’s game against Samford because of the threat of inclement weather.

Heavy rain is forecast across Mississippi on Tuesday and Wednesday.
Mississippi State will return to action Friday at 4 p.m., when it opens a three-game series with Oregon State. Game two is Saturday at 1 p.m., and the finale is Sunday at 2 p.m.

Mississippi State started the 2020 season with a three-game sweep of Wright State at Dudy Noble Field. A total of 28,688 fans attended the series, including 11,006 on Saturday — the largest February crowd in school history.

In that 6-2 win on Saturday, freshman pitcher Chrisitan MacLeod struck out 11 batters in five innings. On Monday, he was named the SEC’s Co-Freshman of the Week.

MacLeod also was honored by Collegiate Baseball Newspaper as one of the publication’s national players of the week.

After missing the 2019 season due to illness, MacLeod made the most of his long-awaited first college appearance. The Huntsville, Alabama, native allowed one hit, walked one and saw one batter reach via error. He didn’t allow multiple base runners in any inning and struck out the final five batters he faced.