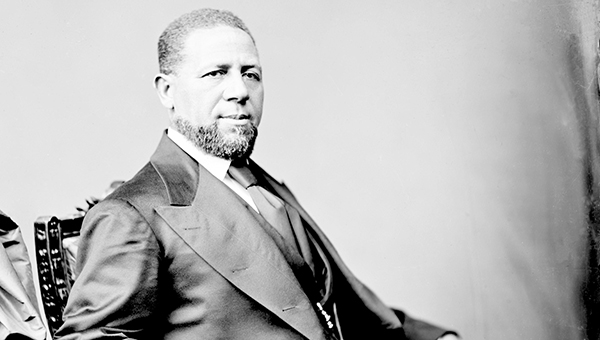 This month I am introducing a resolution to recognize a groundbreaking U.S. Senator from Mississippi.

Hiram Rhodes Revels was the first African American to serve in Congress in United States history. He was chosen by the state legislature in 1870 before the 17th Amendment to the Constitution made for the direct election of senators. He took his oath of office in the United States Capitol on Feb. 25, 1870 — 150 years ago this month.

Born in a country divided by slavery, he broke the Senate color barrier just five years after the close of the Civil War.

Revels and His Fellow Citizens

When Senator-elect Revels walked into the Senate chamber for the first time, he was greeted by applause from the galleries. It was a historic moment that few present expected to come within their lifetimes.

This warm welcome, however, was far from universal. Several senators blocked his credentials solely because of his race. It took two days of debate to settle the issue before he was seated — by a vote of 48 to 8. In perhaps a bit of over-optimism, U.S. Sen. Charles Sumner of Massachusetts said of Revels’s swearing-in, “Liberty and equality were the two express promises of our fathers. Both are now assured.”

One could expect a man treated so poorly by some colleagues to react with anger, especially after living through the era of slavery. But Revels found much to be positive about. Perhaps it was his education in a Quaker seminary or his time as an ordained minister for African Methodist Episcopal congregations across this country, but he came to his new role with the desire to pursue racial reconciliation.

In his maiden speech on the Senate floor, Revels stressed that black residents and white residents of Mississippi were “fellow citizens” — a phrase that could not have been accurately used before the 14th Amendment to the Constitution brought equal citizenship to African Americans just two years earlier.

In the same speech, he also tried to alleviate the concerns of many Southern whites who feared that the newly enfranchised African Americans would use their new political power for revenge.

Quoting Shakespeare, Revels said, “It is excellent to have a giant’s strength, but it is tyrannous to use it like a giant.” He chose instead to work on behalf of all Americans and to guard the “rights which are theirs by God’s universal law,” echoing the Declaration of Independence.

The Legacy of Senator Revels

Revels would continue to work for national healing during his brief one-year term in the Senate and afterward. He would go on to become the first president of Alcorn Agricultural & Mechanical College in Lorman, today’s Alcorn State University — the first historically black land grant college in our nation.

He remained guided by his faith until the end, serving as the district superintendent of his church and a professor of theology at Shaw University, now known as Rust College.

He died in 1901 and is buried in Holly Springs, where his tombstone reads, “Called home at the close of 30 years’ work in the ministry.”

At a pivotal moment in our history, Hiram Rhodes Revels was the embodiment of the ideal that all men are created equal. His momentous selection for membership in the U.S. Senate moved us toward the “more perfect union” envisioned by our founders.