City, county officials to compete against each other in upcoming gumbo cook-off 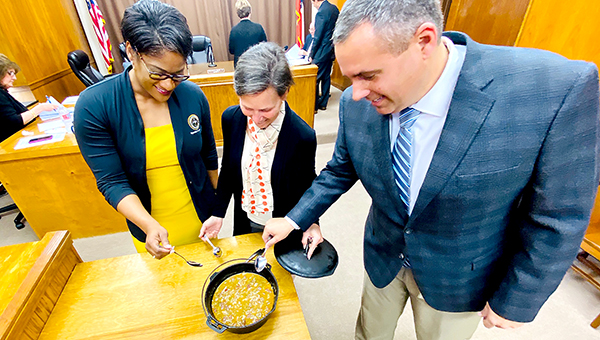 Warren County Supervisors Shawn Jackson, Kelle Barfield and Ed Herring check out a pot of gumbo following a 2020 meeting at the Warren County Courthouse. The supervisors and the city of Vicksburg will face off at the Carnaval de Mardi Gras Gumbo cook-off with a special competition between the city and county governments. (File/The Vicksburg Post)

The Carnaval de Mardi Gras Gumbo cook-off is sure to be a bit spicier this year.

In addition to the competitors who are already signed up to compete in the annual cook-off, city and county elected officials have decided to jump in and have a little competition of their own.

The Warren County Board of Supervisors threw out a challenge, and the Vicksburg Board of Mayor and Aldermen have picked up the gauntlet and are ready to see who can make the best gumbo.

There will even be a special “We’re All in This Together” award presented to the winner.

The supervisors decided to initiate the challenge after a couple of the members attended the Chili For Children Cook-Off in January.

District 5 Supervisor Kelle Barfield said while she and District 1 Supervisor Ed Herring served as judges for the chili competition, a friend suggested the supervisors enter the gumbo cook-off.

“[The gumbo cook-off] benefits another great cause, preservation of our historic buildings and culture through the Vicksburg Foundation for Historic Preservation,” Barfield said. “So we talked about being a part of the event. The other supervisors were supportive. But we thought, ‘Why should we have all the fun?’ The city leaders always seem to be cooking up new ideas for growing Vicksburg, so let’s just see how good they are at cooking for a cause.”

South Ward Alderman Alex Monsour is spearheading the city’s entry into the gumbo cook-off and said he is definitely up for the challenge.

“I am going to make my traditional chicken and sausage gumbo with a couple of secret ingredients in there,” he said.

As a native of Lake Charles, La., and former student at Louisiana State University, Monsour is feeling quite confident with the recipe he has been making for more than 30 years.

“I used to be the cook at the LSU tailgate at Tiger football games,” he said. “We used to have some ‘Cajuns’ who cooked before me, but when they retired they left it up to me to cook.”

Herring and Barfield, along with Warren County purchasing agent Tonga Vinson, will be taking the lead from the county side.

Barfield said she likes the “kitchen sink” method of cooking.

“Just start with a classic roux, bless it with the holy trinity of peppers, onion and celery, then keep adding spices until it tastes right,” she said. “As for meat, we’ll likely go with poultry, because we know voters will gobble ours up.”

A taste test at the office is planned in an effort to include others from the Board of Supervisors’ office to join in.

Monsour said he has no problems in being excluded from the taste test.

“I just hope that we can work together after a decisive victory is in hand. Geaux Tigers,” Monsour said.

The Carnaval de Mardi Gras Gumbo Cook-Off will be held Saturday, Feb. 22 following the annual downtown Vicksburg Mardi Gras parade and will run from 5 to 8 p.m. on Crawford Street outside the Southern Cultural Heritage Center.

Admission to the cook-off is $10 per person and $5 for children. The admission fee includes unlimited tasting of gumbo, live music by Legal Tender and children’s activities. There will also be a beer booth, and for those who don’t like gumbo, hot dogs, popcorn, cookies, king cake and bread pudding will be available for sale.