Flaggs: ‘You want a shelter? We’re going to build a shelter’ 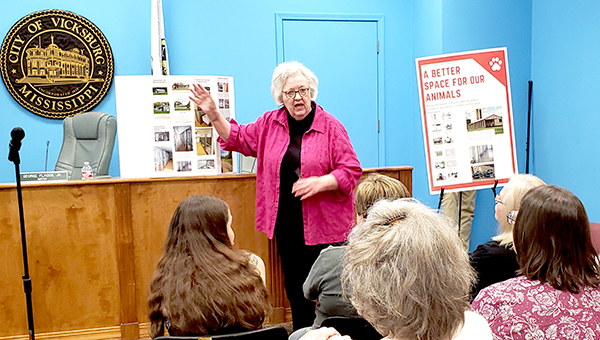 “We’re going to meet right here at 5:30 (p.m.) March 12,” he told the standing room only crowd at a meeting to discuss the city’s current animal shelter and the possibility of building a new one. “You want a shelter? We’re going to build a shelter. If you want to build an animal shelter, I can get you there, but you’ve got to help me.”

He said Wednesday the city will have a new shelter built “within the next year.”

The announcement is a change from Flaggs’ comments at a Feb. 10 meeting of the Board of Mayor and Aldermen, when he said he would consider privatizing the city’s animal control services.

He changed his mind because “I’m convinced the city of Vicksburg wants its own shelter and I’m going to build it. I’m committed to building a shelter.”

The next step, Flaggs said, is finding land where a shelter could be built and finding a way to pay for the project.

Flaggs at an earlier board meeting said he would consider earmarking money in the city’s proposed $55 million capital improvements plan. The plan is funded by an additional 1 percent sales tax that would have to be approved by a voter referendum in 2021.

Wednesday, he said he would have “three funding recommendations without that piece of legislation (the sales tax) and two sites nailed down by the March 12 meeting — write it down.”

Flaggs called the Tuesday meeting in response to residents’ concerns over the present shelter, which is about 50 years old, and its location.

According to flood insurance rate maps for the city, the shelter is located in what the Federal Emergency Management Agency terms a “special flood hazard area,” for a 1 percent annual chance of flood — a base flood or 100-year flood.

The shelter was flooded in the 2011 flood, and animals at the shelter had to be evacuated and relocated. It was threatened in the 2019 flood.

Tuesday evening’s discussion centered on several issues, including the shelter’s condition, criticism of North Ward Alderman Michael Mayfield and a recommendation by resident Marilyn Terry that the city should consider consulting a company called the Dog Kennel Collection, which is based in Lancaster, Pa. and builds prefabricated kennels, about a shelter.

Terry said the company brings the kennels to an area and assembles them.

“They will customize these for you,” she said. “You can design them any way you want. They have a 30-year guarantee on them; they come in metal, they come in siding, they have runs on the outside and then an enclosure they close at night where the dogs can sleep.

“It’s really fairly inexpensive,” she said. “The cost includes the plumbing; everything. The whole ball of wax.”

Terry said a 24-foot by 60-foot insulated kennel with 24 runs and other amenities like heating and air conditioning and ventilation systems, would cost $113,608. She said adding a 24-foot by 40-foot isolation kennel would cost an additional $56,000.

Terry said the city would have to pour the foundation for the building. “They (the company) will build around it,” she said.

“This is just an idea,” she said. “It would have to be investigated by the city to see if it is something they want to do. Cost, I know, has been an issue.

“This could be a community project,” she said, suggesting the residents form a 501(c)3 corporation, “Friends of the Shelter” to raise money for the shelter. She said Vicksburg lawyer David Sessums offered to do the legal work for the nonprofit if that was the way the residents wanted to go.

She also said Sessums and a business partner had about a 2-acre tract of land that might fit the city’s needs. Sessums was expected to meet with Flaggs Monday about the site, which is located on Holly Street off Cherry Street.

Flaggs said Wednesday he was concerned about using prefabricated buildings.

“I’m not sold on a prefab building,” he said.

In order to do what Terry was talking about, he said, “That is not solo. It’s the bid process, and when we get into that, I don’t know where it’s going to go. I don’t think it’s sole source (or single provider).”

If the project has to be bid, he said, it will cost more than the almost $200,000 Terry estimated in the meeting.