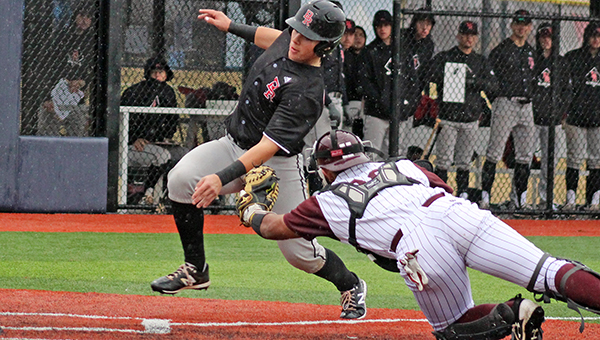 Hinds Community College coach Sam Temple and his players, however, are in the minority. For them, it was a perfect day to play two.

The Eagles rallied for three runs in the bottom of the seventh inning Wednesday afternoon to beat Baton Rouge Community College 5-4 in the first game of a doubleheader at Sports Force Parks on the Mississippi.

Hinds finished the doubleheader sweep by winning 18-1 in game two.

After weeks of similarly rainy weather, Temple said persevering through steady rain and numbing cold to play on Wednesday was not much of a choice at all.

“We’ve gone almost two weeks without taking batting practice on our field. It’s all in the cages. This weather is as bad as I’ve ever seen it,” Temple said. “Hitters, this time of year, need at-bats. They need pitchers throwing to them, goods, bads and all that’s in between to get themselves locked in. Right now they’re scrapping with in-game pitching.

“We came over here and battled through this miserable weather just trying to get at-bats. Because if we don’t, we don’t get them,” Temple added.

All three of Hinds’ games this season have been played on the artificial turf at Sports Force Parks in Vicksburg. Hinds’ home field in Raymond has had its outfield swamped by persistent rain.

The Eagles’ next two games are on the road Friday at National Park College in Sterlington, La., and they aren’t scheduled to play at home again until Feb. 28 against Delgado (La.). With more rain in the forecast, it’s highly possible that Sports Force Parks will continue to be the team’s home away from home during the early part of the season.

“Hat’s off to Vicksburg and Sports Force for providing us this opportunity to come over and play, because we wouldn’t be playing anywhere else. To have this in my hometown brings a tear to my eye every time I come over here,” said Temple, a Vicksburg native.

Hinds improved its record to 3-0 with the win in game one on Wednesday, and it was the second come-from-behind victory. The three runs in the seventh helped ease the frustration of six bad innings at the plate.

Fourteen of Hinds’ 18 outs in the game — it did not record one during the game-winning rally in the seventh inning — came via strikeouts or fly outs. It only scored one run after loading the bases with one out in the fifth inning. Despite putting the leadoff man on base three times in the first six innings, the Eagles entered the seventh trailing 4-2.

Hinds had three hits in the seventh inning, matching its total from the first six.

“That’s their 15th game and our third, and we looked like it. Especially offensively. I feel like I’ve got one of the better offensive clubs that I’ve had, but we’re just wading into this thing a little too protective,” Temple said. “When their back got against the wall, we had some things go our way. Some guys buckled down and put some good AB’s on it, and that’s what we’re capable of doing.”

The winning rally started with a check swing single by Colby Collier. Connor Carter then beat out a grounder on a fielder’s choice and Pablo Lanzarote walked to load the bases.

Walker Burchfield, who had struck out twice earlier in the game, then pulled a double down the left field line to bring in the tying runs. After an intentional walk to Josh Cofield loaded the bases again, Chase DeJean hit an opposite field double into the right field corner to win it.

DeJean finished 2-for-3 with a walk and one RBI.

“I struggled last weekend, so it feels pretty good to get the head out on one and win the game,” DeJean said. “All around we still need to get the bats going a little more, but a win’s a win.”