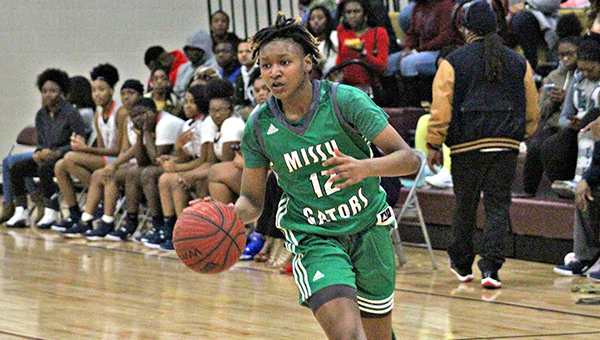 After three frustrating years of polite knocking, the Vicksburg Missy Gators finally kicked down the door on a region championship.

What they found was another door that they’re all too familiar with.

Vicksburg (18-10) earned a first-round bye in the MHSAA Class 5A girls’ basketball playoffs by winning the Region 4-5A tournament championship last week. Now it will face Cleveland Central (22-6) in the second round Friday at 6 p.m. at VHS.

It’s the third year in a row the Missy Gators have reached this stage of the playoffs, but they haven’t been past it since reaching the Class 5A championship game in 1997.

“One word — euphoria. It’s truly euphoric,” Coach Troy Stewart said after his Missy Gators beat Callaway 60-43 in the Region 4-5A tournament championship game. “I feel better than I’ve felt in two or three years now. I know that we were building this program to get to this point. Hopefully we’ll continue to build right now so we’ll always be saying we’re going to get better and better and better.”

The Missy Gators are in the state tournament as a region champion for the first time since 1997. Hoisting the trophy last Friday in Jackson capped a steady climb under Stewart that began in 2017. They won four games the year before Stewart took over, and have now gone 51-37 on his watch.

This year’s team is a balanced mix of veterans and late-arriving youth that could make them a tough out in the state tournament.

All five starters —Tiarra Jones, Karmen Davenport, Destini Sims, Yakia Burns and Sha’Kora Knight — are averaging at least seven points per game. They’ve been joined recently by a slew of freshmen that won the Little Six Conference championship this season, and have provided some welcome depth to the lineup.

Jones and Davenport are the only seniors in the regular rotation. That means this season could be just the start of a long run for Vicksburg as a Class 5A contender. Stewart, however, seemed more focused on the here and now.

“I’m not sure if it’s the actual launching moment, but we do know that our route to the championship is a lot easier going this way than playing in the second-place game or the third-place game,” Stewart said.

The Missy Gators are only 3-3 over their last six games, but two of the losses have been by a total of six points. The other was a 21-point blowout at the hands of Class 6A power Clinton, which won the Region 4-6A championship last week. Oddly, Stewart said, it was the loss to Clinton that sparked his team to finally break through in the region tournament.

That game was followed by a 63-61 loss to Class 5A powerhouse Brookhaven, and then wins over Ridgeland and Callaway in the region tournament. Stewart believes the Missy Gators are playing some of their best basketball when they need to the most.

“This was another solid game for us all the way around,” Stewart said after beating Callaway. “I think it started against Clinton. That game was a blessing in disguise because it forces you to understand how hard you have to work every game and what you need to look like every night. Since then, we’ve been playing lights out.”

UP NEXT:
• Vicksburg vs. Cleveland Central
• Friday, 6 p.m.
• MHSAA Class 5A girls playoffs