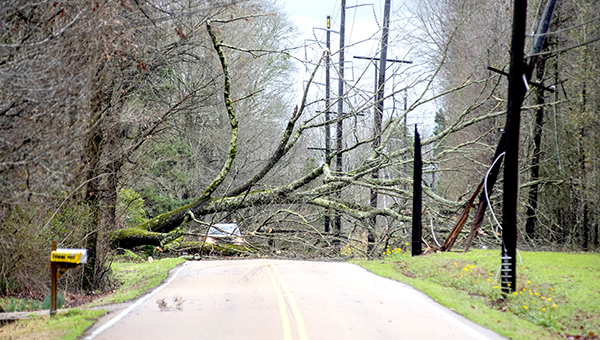 Crews with Entergy are seen on scene where a tree fell across the roadway in the 1700 block of Old Highway 27. When the tree fell, it took with it a number of crucial power lines, knocking out power to hundreds. (Courtland Wells/The Vicksburg Post)

Nearly 3,000 Entergy customers lost power Thursday after a tree along Old Highway 27 fell, tearing down a nearby transmission line and several utility poles, according to information from Entergy Mississippi.

The outage not only impacted homes and businesses but also affected traffic lights and knocked out power to three schools. Soil soaked by recent heavy rain is suspected as the cause for the tree’s fall.

Portions of Old Highway 27 were blocked off by deputies with the Warren County Sheriff’s Office and the Mississippi Highway Patrol was also notified to possibly help with traffic near the major intersection of Highway 27 and Highway 80 near Beechwood Restaurant.

Warren County Sheriff Martin Pace said sheriff’s deputies were stationed on either side of the damage caused by the tree rerouting the traffic. He said power was also out at the Vicksburg Campus of Hinds Community College.

“I’ve got two deputies out there directing traffic in the middle of Highway 27 working traffic out of there,” he said.

The downed tree and the power outages were part of a series of problems brought on by almost a month’s worth of continuous rain.

And the downed tree and power outage is only one of the problems caused by the continuous wet weather.

Earlier Thursday, a tree fell at the intersection of Redwood Road and U.S. 61 North, blocking the highway. That problem was cleared.

Barricades still block off a section of Redwood Road that was closed last week when a landslide covered the road. An earth slide has damaged Boy Scout Road near its dead end.

U.S. 80 is blocked after rain-soaked soil caused the road to buckle.

Warriors trail at the county line is underwater and blocked off because of flooding from the Big Black River, and Bovina Cutoff Road remains blocked by the Big Black.

Warren County Emergency Management director John Elfer said a section of Old Jackson Road in the county is closed by a landslide covering both sides of the road.

“We try to keep moving the traffic if we can, but with the trees down and with the mudslides, they (county road workers) have blocked off, and all we can do is reroute traffic around the problem areas until they get them cleared,” Pace said.

As of 6 p.m. Thursday, 994 Entergy customers in Warren County were still without power. The company expected that number to be less than 20 before Friday morning.