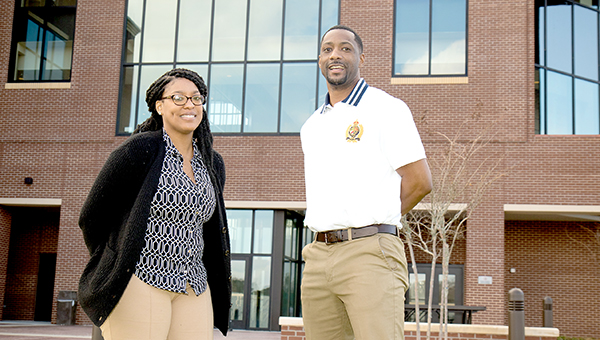 At the office, LaKenya Walker spends her time using high-performance computing to help the military better understand its weapon systems. Cameron Thomas works just a few buildings away as an expert in explosive weapons effects.

Though their jobs are a bit different, the two U.S. Army Engineer Research and Development Center employees now have something very special in common — they are both winners of the 2020 Black Engineer of the Year Award for Modern Day Technology Leaders.

The award recognizes African-American scientists and engineers around the country who are shaping the future of science, technology, engineering and mathematics, as well as promoting diversity and inclusion in the STEM pipeline.

The awards were presented during a ceremony in Washington, D.C. on Feb. 14.

For Walker, a computer scientist in the Information Technology Lab, the award came as a bit of a surprise.

“In all honesty, when my branch chief said he was nominating me, my first thought was ‘why?,'” Walker said. “I did not think I had any chance of actually winning.”

Walker got her start with ERDC in 2014 as a student intern, before being hired full-time after her graduation from Alcorn State University with a degree in computer science.

Since then, she has helped develop an Environmental Simulator, which computationally models how the environment affects military platforms, such as tanks and helicopters. Currently, she is working to support Artificial Intelligence and Machine Learning algorithm development for condition-based maintenance of military weapon systems and is planning to start work toward her Ph.D.

Thomas, a research civil engineer at the Geotechnical and Structures Lab, gave credit for his award to the people around him.

“My success comes as a result of the great circle of people around me in this organization and community,” Thomas said. “They push me to be great.”

Thomas, a graduate of Jackson State University and Mississippi State University, works in the Impact and Explosion Effects branch. His research is used to mitigate the effects of attacks on people, vehicles and installations through methods and tools that help detect threats.

“Some of the most creative and innovative professionals have been nominated for Modern Day Technology Leader Awards, and we are pleased to have LaKenya and Cameron join their ranks,” Dr. David Pittman, director of the ERDC, said. “They bring great credit to ERDC, the Army, and the Nation.”