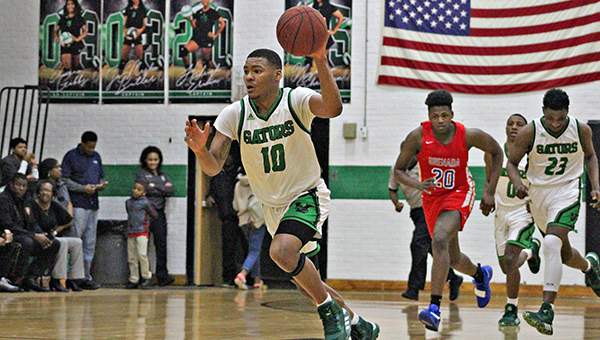 Vicksburg High guard Peytin Jackson rushes up the floor Tuesday against Grenada. The Gators will travel to play Center Hill in the second round of the MHSAA Class 5A playoffs on Saturday.(Ernest Bowker/The Vicksburg Post)

The first is championships, or at least a deep run into the state playoffs. The Vicksburg Gators are still working on that one.

The second is reaching 20 wins. The Gators can check that one off the list.

Vicksburg reached the 20-win mark for the first time since the 2010-11 season by routing Grenada 85-50 in the first round of the MHSAA Class 5A state tournament on Tuesday. It was a huge milestone not only for the program, but on a personal level for head coach Kelvin Carter.

Now in his third full season as coach since taking over from his mentor Dellie C. Robinson, Carter reached the milestone for the first time.

“This is so sweet, because I thought it would take five or six years to get to 20 wins,” Carter said after Tuesday’s victory. “I know I have big shoes to fill, but I think I put my own shoes on tonight.”

The Gators (20-9) had won 19 games three times since 2011, but finally broke through to the next level with a dominant performance against Grenada.

Eleven players scored, led by a season-high 29 points from senior guard Cameron Butler. They shot 61 percent from the field, and 55 percent (12-for-22) from 3-point range.

Vicksburg led by 22 points at halftime and hardly coasted after that. They held Grenada to five points in the third quarter to stretch the lead to 36 points.

The big lead allowed Carter to rest his starters. They were on the bench for the last two minutes of the first half, and the last four minutes of the game. Reserves and young players more than held their own during those stretches, which Carter said would help in the long run.

“I played an eighth-grader and a ninth-grader tonight, and they’re our future,” Carter said. “Tyler Carter is going to be a beast when he’s a junior and Malik Franklin is our point guard of the future. It was good to see those guys play, and play well.”

The rout of Grenada (13-16) might be the last easy game the Gators have this season. Their second-round game is a long road trip to Region 1-5A champion Center Hill (22-8), the No. 4-ranked team in Mississippi according to MaxPreps.com.
Vicksburg and Center Hill play Saturday at 6 p.m.

Carter said Vicksburg and Center Hill are similar in that both like to run the floor and shoot 3-pointers. Vicksburg has shot 422 this season, and Center Hill 488. The Gators have a much higher percentage, though, at 47 percent to Center Hill’s 32 percent.

“They shoot the ball well, They’ve got a 6-7 guy on the perimeter and have always been good shooters,” Carter said. “They’re going to play the same style of ball we play. We just have to strap up, come to play, and let the chips fall where they may.”

The winner of Saturday’s second-round game advances to the quarterfinals against either Cleveland Central or Columbus on Feb. 29 at Itawamba Community College. Beyond that, potential matchups with either Forest Hill or Wayne County in the semifinals, and Callaway or New Hope in the championship game — all of which have already won 20 games already — await.

It’s a hard road, Carter said, but the prize is worth the work.

“It looks like we have the toughest road to the Big House. But we’ve been battle-tested all season. We had a tough schedule and showed resilience,” Carter said. “That’s all you can ask for as a coach, is a chance.”