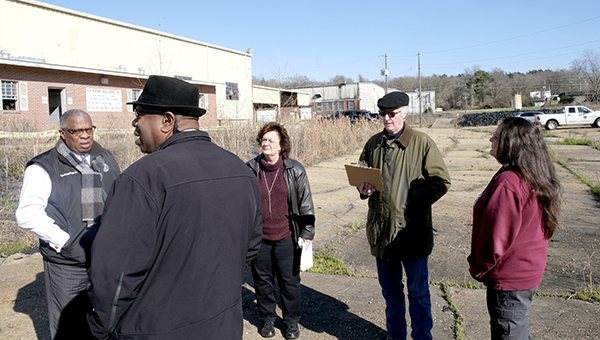 City officials visited two sites on opposite sides of town Friday afternoon that are considered as possible sites for a new city animal shelter.

The site visits are part of Flaggs’ commitment to build a new animal shelter by some time in 2021.

The commitment came at a Tuesday night public hearing to discuss the problems at the city’s present animal shelter and the possibility of building a new one.

Flaggs said he would have at least two potential sites for the shelter and three options to pay for it by a second meeting on the shelter March 12.

Friday, he said the rubber recycling site is being considered “because we (the city) own it; it’s free.”

The city acquired the 12.6-acre tract from the Secretary of State’s office in December. The property is the site of a 2006 fire that damaged the rubber recycling plant, and the property still has piles of rubber on it.

The Board of Mayor and Aldermen in April authorized PPM Consultants to perform a Phase 1 environmental assessment of the property.

Preliminary plans propose putting the shelter on the parking area south of the former plant and expanding the proposed site further west and south to Rubber Way, the street that runs in front of the plant.

According to maps on the city’s website, the property is located in a flood zone, but Mayfield said the proposed area for the shelter on the property has not flooded.

Richardson, however, said the property will have to be elevated to comply with Federal Emergency Management Agency flood plain regulations.

The privately-owned property for sale on Oak Street is a 1.5-acre tract south of Depot Street and bounded on the west by the Kansas City Southern Railroad tracks.

“I looked at this site earlier; this is one of two sites in this area I looked at,” Mayfield said. He did not know the price of the property.

City officials have been considering a possible new animal shelter for several years. The present shelter is almost 50 years old and sits on a tract of land on Old Mill Road adjacent to the Vicksburg Fire Department’s training center.