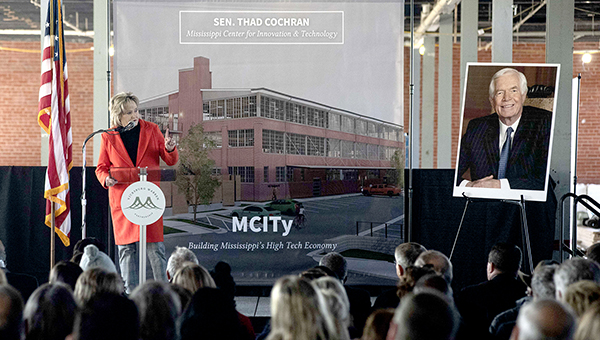 U.S. Sen. Cindy Hyde-Smith (R-Miss.) speaks during a ceremony in February at Mississippi Center for Innovation and Technology, where the future facility was named in honor of former U.S. Sen. Thad Cochran from Mississippi. (Courtland Wells/The Vicksburg Post)

Business leaders, government officials and area residents turned out Friday at the former Mississippi Hardware building to dedicate the building to one of the state’s most revered public officials, former U.S. Sen. Thad Cochran.

More than 100 people gathered inside the building for the ceremony dedicating the Mississippi Center for Innovation & Technology, or MCITy, in Cochran’s memory.

Cochran, a Republican, died in May 2019 at the age of 81. He served as a United States senator representing Mississippi from 1978 to 2018 and was serving as Senate Appropriations Committee chairman when he resigned from the Senate in April 2018 because of health concerns.

He was influential in helping the development of MCITy.

“We will see the fruits of his labors for generations to come in a building like this,” she said. “He had the vision, he had the ability to bring this together and make it happen through the appropriations process as chairman, so critical to our state for so many things that we enjoy to this day.”

Hyde-Smith said it took vision to look at the future and be able to capitalize on the then-Mississippi Hardware Building’s historic value to work toward its development.

“It is so many parts of the puzzle that came together,” she said. “You’ve got the investors, you’ve got the people to pull things together, but what it takes is leadership, and your team did this.”

She called the center project “life-changing. These are things that are going to make us so proud of our grandchildren, our great-grandchildren who are going to be around when we’re not around.”

Friday’s ceremony, she said, was not about one person.

“It’s about the future, it’s about capitalizing on something that was out there called an opportunity and bringing it together.”

Warren County Board of Supervisors President Dr. Jeff Holland said Vicksburg and Warren County have the resources to provide the opportunities for education in technology fields, entrepreneurship and technical start-up training.

“All we have to do is take advantage of it. Our goal is to develop an intrinsic in-house, home-spun workforce, capable of doing the work our state needs done well into the next decade,” Holland said.

Mayor George Flaggs Jr. called the center “the first of it’s kind,” outlining it will provide the opportunity to train the state’s “best and brightest” to meet the work needs of the future.

“This is going to be the biggest game-changer in this state,” he said, adding he has never seen a public/private partnership like the center come together in his career in government.

Built in 1936, for the M. Fine and Sons Mfg. garment factory, the Mississippi Hardware Building closed in October 2013.

Developers involved with the building’s renovation  unveiled plans in August 2017 for a $19 million project to convert the building into a innovation and tech center.