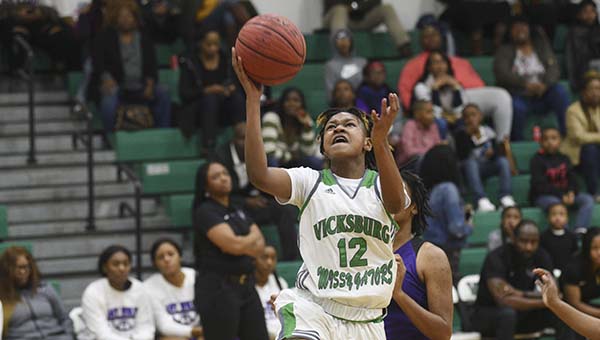 For the first time in a generation, the Vicksburg Missy Gators are among Mississippi’s basketball elite.

The Missy Gators let two double-digit leads dwindle to a single possession in the fourth quarter, but managed to hang on and beat Cleveland Central 56-51 on Friday in the second round of the MHSAA Class 5A girls’ state tournament.

“I don’t want to sound cocky, but my staff and I planned for by the time our fourth year was here we should be trying to win a championship. It’s the same thing we would want out of the girls we had,” VHS coach Troy Stewart said. “The ladies that we have now bought in 100 percent, and the seniors that I currently have, have literally believed in themselves since day one. It’s big for the school. For Vicksburg High School. Not necessarily us (coaches).”

Vicksburg also won its first region tournament championship since 1997, which gave it a first-round bye in the state tournament. It wound up facing Cleveland Central (22-7), which had beaten the Missy Gators in December and gave them a hard time in the rematch as well.

Vicksburg led by as many as 14 points in the first half, but never could put together one last push that would have put the game away. The lead settled around 10 points for most of the second half, and was 13 when things got interesting midway through the fourth quarter.

A technical foul on the Missy Gators led to two free throws and a 3-pointer by Cleveland Central’s Takeila Wright. A steal and a basket by Taylor Rash on the next possession chopped the seemingly safe 13-point margin to a precarious one, 44-43, with 4:03 remaining. The 13-1 run by the Wolves took only 90 seconds.

Vicksburg stopped the bleeding and stretched the lead back out at the free throw line. It made 8 of 12 free throws over the next 3 ½ minutes to lead 54-43 with 37.1 seconds to go, but the game was far from over.

Another technical foul on VHS, combined with a regular foul, gave Wright four free throws and she made them all — as well as one more on the ensuing possession and a 3-pointer after a Vicksburg turnover. Wright scored eight points in 10 seconds to get Cleveland Central back within one possession, 54-51.

Stewart called a timeout at that point to settle the Missy Gators down, and it worked. Destini Sims scored on a layup off a press break with 9.8 seconds to go, and after a Cleveland miss got the ball again on a similar play. The second time, she dribbled out the clock to send the Missy Gators on to Itawamba.

Vicksburg was just 17-for-29 from the free throw line but did enough to win.
Sims, along with Tiarra Jones and Yakia Burns, finished with 11 points to lead the Missy Gators. Layla Carter added nine and Sha’Kora Knight had eight.

Stewart said that sidestepping not one, but two potentially disastrous fourth-quarter collapses showed him a lot about his team’s character.

“We’re excited. We knew that if we played well enough we can overcome just about anything. The girls are still showing extreme resilience. I’m proud of them. I’m proud of the way we hung in there even through my mistake, even through the techs that we got. We’re fine. We just hung in there, kept our wits about us, and it worked out,” Stewart said. “We overcame adversity, and they’re doing a good job of it. They’re not letting outside factors decide whether we win or lose. It’s going to be on us now. And I’m proud of them for that.”