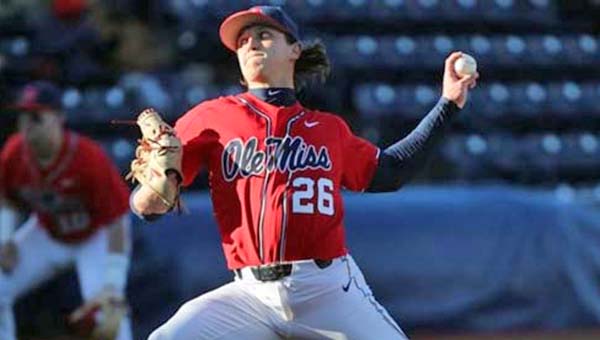 OXFORD — Ole Miss made history on Friday by making sure nothing at all was happening.

Pitchers Doug Nikhazy, Drew McDaniel and Jackson Kimbrell pitched a combined no-hitter as the Rebels routed Xavier 13-0 in the opener of a three-game series at Swayze Field.

Nikhazy started and threw six innings. He had nine strikeouts and only walked two batters. McDaniel followed with two innings, and Kimbrell closed it out with a perfect ninth. The three Ole Miss pitchers walked three batters and hit one.

The offense backed them with five runs in the second inning and three more in the third. A two-run double by Tyler Keenan in the fifth inning pushed the lead to 9-0, and Knox Loposer hit a three-run home run in the eighth.

Hayden Dunhurst led the Ole Miss offense by going 2-for-4 with five RBIs and two runs scored. He drove in two runs with a single in the second inning and a three-run homer in the third.

Tim Elko was 2-for-3 with one RBI and two runs scored.

For the second Friday in a row, Mississippi State used a big late-inning rally to earn a victory. The Bulldogs scored six runs in the bottom of the eighth inning and beat Oregon State 6-2 in the opener of a three-game series.

In last week’s season opener against Wright State the Bulldogs also had a six-run inning to rally for a 9-6 victory.

Mississippi State (4-0) only had three hits through the first seven innings, but exploded for five in the eighth.

The first six batters in the inning reached base. Justin Foscue drove in two runs with a single to tie it, and then Brandon Pimentel followed with a three-run home run to give the Bulldogs a 5-2 lead.

Kamren James reached on a single and eventually scored on a passed ball for the final run.

“It’s a lesson for our ball club because you can’t put your head down and pout. We had some guys have some really tough at-bats early, but I’m really proud of Josh Hatcher’s at-bat in the eighth. He had had a tough day and some tough matchups on the lefties, and that walk was huge,” Mississippi State coach Chris Lemonis said. “Rowdey (Jordan) had struck out a couple of times but competes, fights and fists that ball into the infield and he hustled down the line to get it going. Hopefully, we can build off that for the future.”

Spencer Price closed out the win with a perfect ninth inning. He was the last of four MSU pitchers who combined for 10 strikeouts.

Former Warren Central star Carlisle Koestler got the start and pitched three scoreless innings. He allowed two hits, walked two batters, and struck out four.
David Dunlavey, the third pitcher in the order, allowed one run in three innings of relief and earned the win.

Game two of the series is Saturday at 2 p.m.

Central Arkansas pitcher Gavin Stone allowed one run and struck out eight in 6 2/3 innings to earn the victory.

Danny Lynch hit a solo home run for Southern Miss (4-1), and Reed Trimble was 2-for-5 with one RBI.