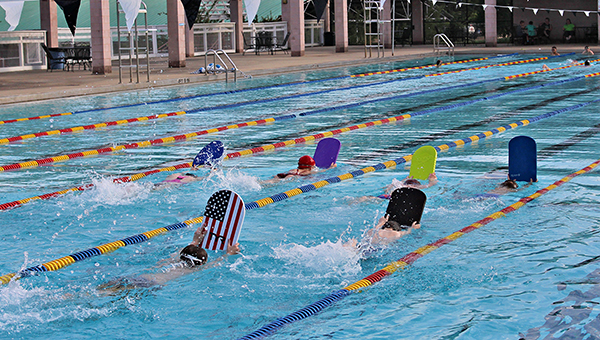 Vicksburg Swim Association members hold up their kickboards during a drill at practice last summer at City Pool. An American Red Cross lifeguard certification class is scheduled for March 30 through April 10 at the Vicksburg YMCA. (Ernest Bowker/The Vicksburg Post)

Sitting here, with the rain falling on a February morning, people are more likely to curse getting splashed by a cold puddle than smile at the thought of splashing around a pool on a warm summer day.

These, though, are the kinds of weeks that will determine how much pool splashing a lot of people get to do this summer.

Public pools all over Vicksburg — at City Pool, the YMCA, Vicksburg Country Club and the Knights of Columbus — are once again facing a severe shortage of certified lifeguards. Wayne Scott, the director of aquatics programs at the Vicksburg YMCA, said he likes to have about 20 on staff. City Pool manager Sylvia Gurtowski needs about 25.
Last year, they had about half of that. A shortage of lifeguards at area pools can lead to schedule reductions and closures.

To be hired as a lifeguard, everyone must pass a two-week American Red Cross certification class that is only offered locally once a year. This year’s class is scheduled for March 30 through April 10 at the Vicksburg YMCA. The cost is $125 for YMCA members and $175 for non-members.

Signing up for the class is the easy part.

The proficiency test can be difficult even for experienced swimmers, which is why the next few weeks are so important.

If you or your children are thinking of being a lifeguard as a part-time job this summer, it is imperative to not only pass the certification class but to be in shape for it. That means getting in the pool now, when it’s anything but swimming weather.

The YMCA and Wyatt’s Gym both have indoor pools. Wyatt’s offers affordable membership rates. Scott said he will allow free use of the YMCA’s pool to anyone — even non-members — who sign up for the certification course. He’ll even help them create a workout routine if needed.

To register for the certification class, call Wayne Scott at 601-638-1071 or email him at wayne@vicksburgymca.com. Sylvia Gurtowski at City Pool can be reached at 601-634-4516 and can also answer questions about the subject.

Summer fun starts in the winter. If you want to be a lifeguard, the job starts now.