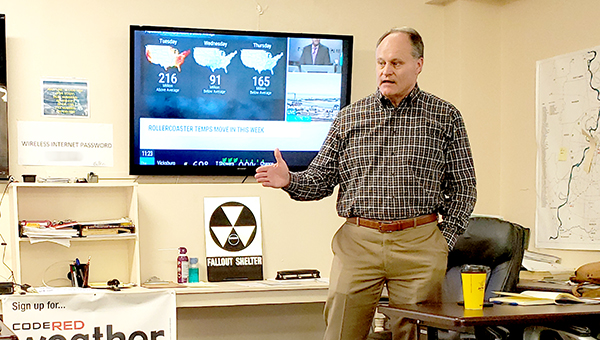 A report on the condition of Warren County’s roads damaged by the periods of heavy rain could be available in the next three weeks, the Board of Supervisors learned Monday.

“You will have a report in your hands that has all these (damage) sites and data on these sites as to what their problems are, photographs and cost estimates and the recommended solution,” said county engineer Keith O’Keefe.

O’Keefe’s comments came during an update on an assessment of county roads that have been damaged by the continuous periods of heavy rain in the area. A total of 72 roads are expected to be assessed for damage, he said.

“We looked at 29 sites last week,” he said. “We are out this morning, looking at sites; we’ve got another 43 sites to go.

“We’ll finish up the site assessments sometime this week, and then probably have to go back to the 29 worst sites and do a little bit more investigation in terms of taking measurements to come up with better cost estimates.”

The county has already approved an emergency declaration because of the damage to the roads caused by the rain.

Some of the problem areas, he said, can be handled by the county’s road management department. Other problems, he said, will require more extensive work.

The slide problem on Redwood Road, he said, could cost more than $1 million to repair. Redwood Road is presently closed because of the major landslide.

Showing photographs of the problem on Redwood Road, O’Keefe said, “All this soil is saturated. We had 20-plus inches of rain over the last six weeks.”

If the area continues to get rain, he said, the soil will not dry out and stabilize. And the mass of dirt from the slide is affecting the road, he said.

“There’s a lot of weight that’s actually pushing on this roadway,” O’Keefe said.

He showed photos where the road shifted because of the weight of dirt and where the pavement was cracking.

O’Keefe suggested the county should apply for disaster funds from the Natural Resources Conservation Service. The NRCS, he said, can provide grants for work in the county on a basis of 75/25, with the NRCS paying 75 percent of the project cost and the county 25 percent.

NRCS, he said, is waiting for a presidential emergency declaration.

Because of the potential cost of some of the roadwork, he said, the supervisors will have to prioritize the repairs.

“In some cases, these (road repairs) might not be a permanent fix just to get the road back in place,” O’Keefe said. “We do what we can. It all comes down to cost, what we’re able to do. I think you’ve got to go through this process with the NRCS and get these projects identified.”

When the assessment is completed, he said, all the information on the road damage will be available for the agency.

“I think what our next steps are going to be is to finish looking at those other 43 sites this week, get a letter of what can be done by the county road department. Where you’ve got roadways that are shut down or there’s a threat to shut down a roadway, those obviously are priority projects.”