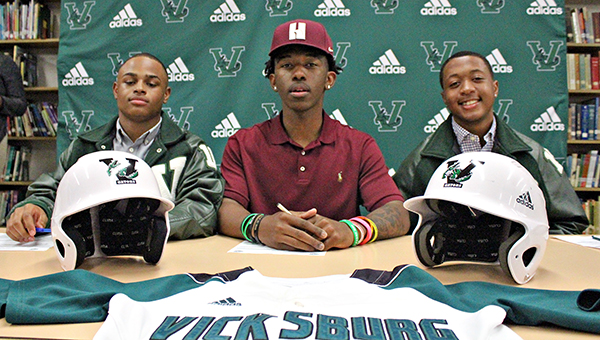 It’s been a while since Vicksburg High’s baseball program had a day like this.

Three players — catcher Ryan Thompson and pitchers Dylan Whitfield and Kendrick Bershell — gathered together in the school’s library Monday afternoon, surrounded by teammates and family, to celebrate their recent signings with some of Mississippi’s junior colleges.

Bershell signed with Hinds Community College, while Thompson and Whitfield both signed with Coahoma.

Vicksburg has had several baseball players sign in recent years, but this marks the largest class in nearly a decade.

“These guys worked real hard. They worked their butt off and they earned everything that they’re receiving today,” Vicksburg coach Antonio Calvin said. “The only thing that we did as coaches was put these guys in the proper position so that their talents could be displayed in front of the proper audience. Once the coaches saw what they liked, they immediately scooped these guys up.”

Thompson and Whitfield will head to Coahoma Community College together. Thompson is the Gators’ starting catcher, but said Coahoma’s coaches plan to use him at second base, where he played as a sophomore. Whitfield is a pitcher and infielder, but has been told Coahoma wants to use him only as a pitcher.

Bershell is heading to Hinds as a pitcher and second baseman. He led the Gators with a .422 batting average, four triples, 12 RBIs and 12 runs scored.

Bershell might be more promising, however, as a pitching prospect. His fastball tops out at 90 mph and he had 19 strikeouts in 6 2/3 innings in his 2020 debut on Friday, in a 4-0 win over Porter’s Chapel Academy.

“I had other options, but Hinds felt like it was the best place out of all of the jucos I had,” Bershell said. “I’ve been dreaming about that since I was little, to get to the next level and take that next step.”

Calvin is hoping the success of this group of seniors inspires those coming behind them to dream just as big. Most of the Gators were on hand for the signing ceremony, and they collected behind their three college-bound teammates for a group photo as the proceedings wrapped up.

“It shows them that the possibilities are endless. This is just the beginning for Vicksburg baseball. It’s been 10, 12 years since we’ve had something like this. So for us, we want this to be the tip of the iceberg in terms of possibilities for our program,” Calvin said. “We’re extremely proud of these three guys, but for the guys that are standing behind them this opens their eyes to what’s in store for them as long as they work hard and do what they’re supposed to do.”