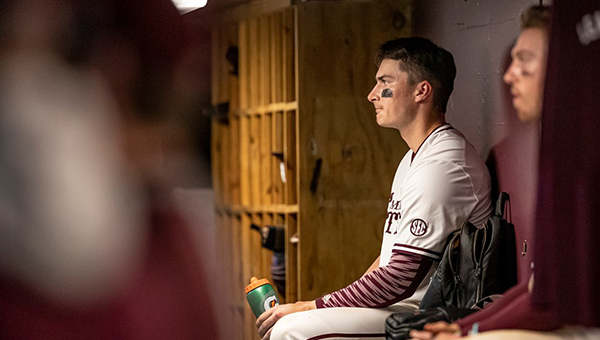 Mississippi State baseball players sit in the dugout near the end of their 8-4 loss to Texas Southern on Tuesday. It was the only the 10th time in 118 meetings that the Bulldogs have lost to a SWAC opponent. (Gabby Zgunda/Mississippi State Athletics)

STARKVILLE — Victor Bueno had two hits and drove in two runs, and Texas Southern shocked Mississippi State by beating the Bulldogs 8-4 on Tuesday at Dudy Noble Field in the biggest college baseball upset of the young season.

Mississippi State, which has reached the College World Series the past two years, had been 107-9 all-time against teams from the Southwestern Athletic Conference. Its last loss to a SWAC team was in 2015, when it lost 3-2 to Arkansas-Pine Bluff at Dudy Noble Field.

Mississippi State will face another SWAC team on Wednesday, when Alcorn State visits at 2 p.m.

Mississippi State (5-2) is ranked No. 6 in the latest Collegiate Baseball poll, while Texas Southern (1-9) had not won a game before Tuesday. Texas Southern, in fact, had been outscored 47-7 in its last five games.

“This is the second-biggest win in the history of the university,” said Texas Southern coach Michael Robertson. “You’ll (always) remember the win in the (2004) regional against (defending national champion) Rice. This sends a message about the SWAC.”

Bueno’s two-run single was part of a four-run fourth inning that gave Texas Southern (1-9) a 7-3 lead. It added another run in the eighth, and its pitching staff kept the Bulldogs in check.

Camden Guarnere, Robert Loza and Jesse Garcia combined to allow seven hits and five walks. Loza allowed one run and only one hit in 3 1/3 innings of relief.

Trailing 8-3 entering the ninth inning, Mississippi State mounted a late rally. Two walks and a single brought in a run and put runners at first and second with one out. Garcia relieved Loza on the mound for Texas Southern, however, and struck out the last two batters to finish it.

Jordan Westburg went 2-for-3 with a dhouble, RBI and two runs scored for Mississippi State, which scored three times in the first two innings and then not again until the ninth.

Mississippi State outhit Texas Southern 8-6, but a pair of costly errors, six walks and a pair of hit batters were more than State could overcome. MSU left 11 runners on base.

“This is a really big wake-up call … It should hurt,” Westburg said. “It should hurt for everybody on the team, guys that are on the bench, guys that started, guys that came late in the game … The good thing is that we have a game tomorrow, so we get to go to sleep, come back to the ball field and compete right away, which is the best thing for us.”

Ole Miss 4, Southern Miss 3
Hayden Leatherwood hit a two-run home run in the bottom of the seventh inning to give Ole Miss the lead for good, and it went on to beat Southern Miss 4-3 on Tuesday.

Tyler Keenan went 2-for-4 with one RBI for the Rebels (7-1), while Peyton Chatagnier was 1-for-4 with a double, one RBI and one run scored.

Will McGillis hit a solo home run in the top of the seventh to give Southern Miss (6-2) a 3-2 lead, but Leatherwood’s bomb in the bottom of the inning put the Rebels back in front.

McGillis was 3-for-5 with the home run and two RBIs.