Highway 80 repairs could still be months away 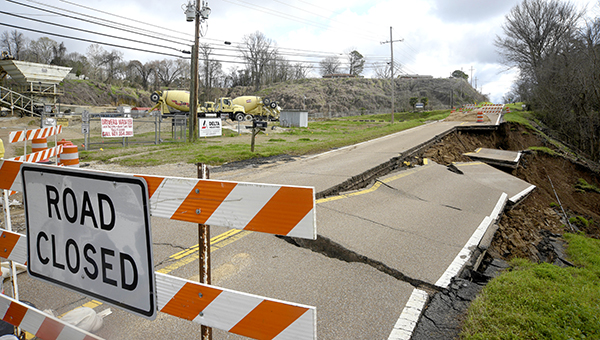 Highway 80 is seen still closed due to a slide just near Mount Alban Road that occurred Feb. 11. Officials with the Mississippi Department of Transportation said repairs are still months away. (Courtland Wells/The Vicksburg Post)

Officials with the Mississippi Department of Transportation are continuing their assessment of the problems affecting a section of U.S. 80 that was closed Feb. 11 after collapsing.

The 1700 block of Highway 80 between the cement plant and Mount Alban Road was blocked after problems with the road caused by runoff from heavy rains. The runoff eroded the highway’s shoulder and caused the roadway to fail, making it unsafe to travel.

“Our maintenance forces are still exploring options for getting a design together for the rebuild,” MDOT spokesman Mike Flood said. One big decision will be whether to acquire more right of way for the repair or fix it in the confines of what we currently have.

“Either way, we’re still looking at several months before it gets repaired,” he said. “If we have to get more right of way, it could be further than that.”

Whatever decision is made, Flood said, the unstable soil under the road will have to be removed and replaced with stabilized material.

“We’ll have to rebuild that embankment with less steep slopes because all the slopes there are pretty steep,” he said. “Buying more right of way would allow us to fix more slope in the long run.”

U.S. 80 is a major thoroughfare in Warren County. And has been affected by similar problems in the past.

In 2016, erosion caused by two days of heavy rains forced MDOT officials to shut down both lanes of a section of U.S. 80 at Thornhill Road to repair a washout that removed dirt from under the highway’s westbound lane.

The highway is one of many roads the county closed because of erosion problems. County officials learned Monday a total of 72 county roads have been affected in some way by the heavy rains that have hit the area over the past six weeks.

Freetown Road is closed because a bridge is being replaced. The problem is not weather-related.