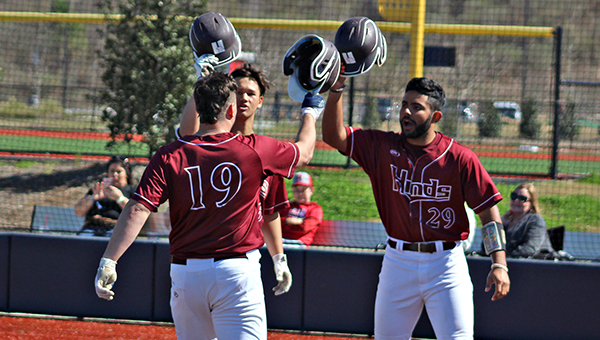 Hinds Community College’s games so far this baseball season have fallen into one of two categories. Either the Eagles rally late to win, or they bludgeon their opponent into submission.

On Tuesday, they had the best of both worlds.

Hinds hit four home runs — including three in a four-batter span in the fifth inning — to overcome a three-run deficit, and beat Jones College 8-5 in the first game of a doubleheader at Sports Force Parks.

It was Hinds’ second come-from-behind victory of the season, and the fourth game in a row in which it has scored at least eight runs. Hinds is ranked No. 7 in the latest NJCAA Division II national rankings.
Hinds (8-0) hit three more home runs in game two and won 9-7 to complete the sweep.

John Bolton hit a solo home run for Hinds in the third inning of game one, and then Connor Carter, Walker Burchfield and Caleb Sterling all went deep in the fifth. The latter three home runs all came with two outs, and turned a 5-2 deficit into a 6-5 lead for the Eagles in a span of four batters.

Carter started the barrage with a shot over the left field fence. Pablo Lanzarote followed with a walk, and then Burchfield and Sterling went back-to-back.

“That’s amazing. Going back-to-back, that’s an awesome feeling,” said Sterling, a former Warren Central star. “Base hits are contagious. Once one guy goes, every guy sees it and bam, it’s pop, pop, pop after everything.”

Hinds added two more runs in the bottom of the sixth to extend its lead to 8-5. Colby Collier hit an RBI double, stole third, and scored on a groundout by Carter.

That clinching rally came after the Eagles escaped a jam in the top of the sixth. Jones had runners at first and second with one out, but Sterling got O’Neill Burgos to hit a soft liner right back to him and then threw to first to double up Bailee Hendon and end the inning.

“(Pitching coach Keller) Bradford came and asked me what I wanted to start the guy off with and I knew he was sitting fastball and wanted to do something big, to bust the game open, tie it up, do something with it. So I said I’m going to bust him inside and I did. I jammed him real good,” Sterling said. “That was huge getting out of that inning.”

Sterling, who started the game as the designated hitter, pitched the last 2 1/3 innings and earned the victory. He allowed one hit, one walk and no runs.

Hinds’ late-inning magic came in a game where they did not play poorly despite falling behind. Jones scored four runs in the fourth inning with the aid of a fly ball that was lost in the sun and a squirrelly ground ball to first.

The fly ball landed between two fielders for a double and led to a run. Later in the inning, Kirkland Trahan hit a grounder down the first base line that should have been the third out, but pitcher John Tait Garner was unable to get to it. The first baseman Burchfield did grab it, but Trahan eluded his tag and two runs scored on the play.

Hinds shook it off, though. It got one run back in the bottom of the fourth on an RBI single by former Warren Central star Vantrel Reed, and then played home run derby in the fifth to take the lead for good.

“Bad breaks. When you miss two balls because of the high sky, and then we had the little chopper over here at first, those things happen. But when you face good teams such as (Jones), that’s how it is. A bad break leads to runs, and when you make a mistake it’s harder to live with because you can bet that people are going to capitalize on it,” Temple said. “We were really lucky, and I was really proud of the guys and the way that they played.”

Tuesday’s games did not count in the MACJC standings. Both Hinds and Jones have been plagued by wet fields — Hinds has played six of its eight games at Sports Force Parks in Vicksburg — and put together Tuesday’s doubleheader on the fly as a non-conference game. They’ll play again on March 24 in Ellisville.

“We put this together in about four hours,” Temple said with a laugh.