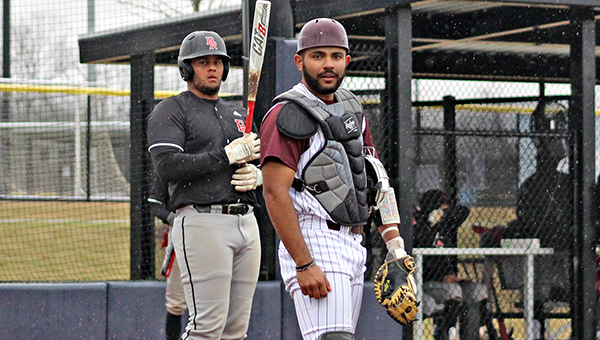 Hinds Community College catcher Pablo Lanzarote was named the MACJC and NJCAA Player of the Week on Tuesday. He is batting .522 this season for the Eagles, who are 8-0.(Ernest Bowker/The Vicksburg Post)

RAYMOND — Hinds Community College is off to a perfect 8-0 start this baseball season, and two of its players earned some state and national recognition for their roles in the success.

Pitcher Preston Johnson, meanwhile, earned the MACJC Pitcher of the week award.
Lanzarote, a Cumberland University signee, had a stellar week as he hit .583 (7-for-12) with two doubles, two home runs, and 11 RBIs. He also walked three times, stole one base, and scored seven runs while leading Hinds to four victories.

Lanzarote is hitting .522 overall this season, with four doubles and 15 RBIs.

Johnson, a Mississippi State signee, earned his first win of the season last friday as Hinds beat National Park College 11-1. Johnson threw five innings while only allowing one run on two hits, and racking up 11 strikeouts.

Hinds will be back in action on Friday, against Delgado Community College. First pitch is set for 2 p.m. at Joe G. Moss field in Raymond.