King overcomes tough life, loss of leg; in need of a good home 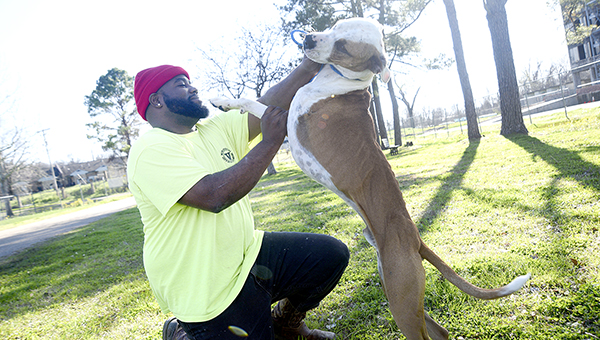 Vicksburg Animal Shelter Assistant Manager Martez Carroll plays with with King, a 4-year-old Boxer-mix, who is up for adoption at the shelter. King lost one of his legs after being hit by a car. (Courtland Wells/The Vicksburg Post)

He has been sick, deserted and hit by a car, but through it all, he is still standing, even if it’s just on three legs.

King, a 4-year-old Boxer-mix, arrived at the Vicksburg Animal Shelter on New Year’s Day, and although he has lived a hard life so far, Animal Shelter officials say it has not altered his sweet disposition.

As a puppy, King contracted parvo and was taken to the Woodland Animal Clinic.

Lindsey said he was treated for the virus, but unfortunately, his owners never came back to take him home.

The clinic kept the dog until he was healthy again, and then they adopted him out.

While he was living with his second owners, Lindsey said, King was hit by a car which caused him to lose his leg.

This injury, though, did not deter King from having a normal life. He adapted to his handicap and got around as well as any other four-legged canine.

Regrettably, King was brought to the shelter at the first of the year due to an “accomplice” in the neighborhood, Lindsey said.

“It was the other dog that had been the issue,” she said, but unfortunately, because King had repeatedly escaped from his home, the owners felt the need to bring him to the shelter.

In addition to being a sweet dog, Lindsey said, King loves attention.

For anyone who may be interested in adopting King, they are welcome to come out to the shelter and meet him.

King is neutered and although he is heartworm positive, Lindsey said, there is someone who has offered to pay for the treatment upon adoption.