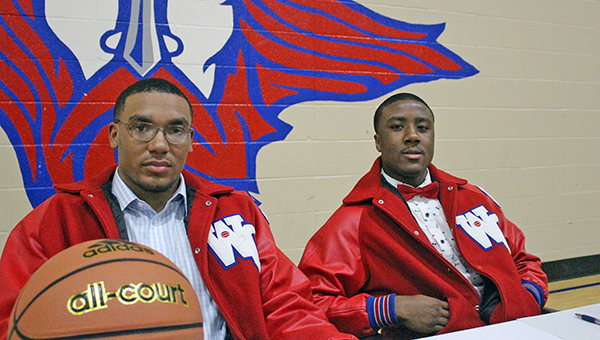 During the recruiting process, Jabari Bowman tried hard to convince his Warren Central basketball teammate Daniel Smothers to join him at Jones College.

Smothers decided to go his own way, and signed with Copiah-Lincoln. The two still celebrated their decisions together on Wednesday, in a ceremony in Warren Central’s Gym B, side by side for one of the biggest days of their high school careers.

“It’s great, because not a lot of basketball players from Warren Central sign and go to college to play,” Bowman said. “Football, it’s 11 players on the field. Basketball it’s only five, and only 14 on the team. You’ve got to work extra hard to get some playing time alone.”

Bowman, a 6-foot-6, 230-pound power forward, has been a starter for Warren Central the past three seasons and a college prospect for nearly as long. He averaged 13.2 points and 10.8 rebounds per game as a junior, and 17.3 points and 7.9 rebounds this season.

He played in the Mississippi Association of Coaches state all-star game as a junior, and was picked to play in this year’s Mississippi-Alabama All-Star Game on March 13 at Mississippi College in Clinton.

Bowman said getting to sign and continue his career was the best achievement of all.

“I worked hard for it. It’s the cherry on top,” Bowman said. “I didn’t get to make it that far in the playoffs, but that won’t be my last high school game.”

While Bowman’s size and skill put him on the radar early in his career, Smothers did not truly break out until this season. The 6-foot point guard averaged 16.4 points per game, nearly triple his average of 5.9 points per game from last season.

He also averaged 2.5 rebounds, 1.7 assists and 1.4 steals per game.
Smothers said Bowman tried to convince him to go to Jones, but he decided to chart his own path at Co-Lin.

“He was trying to get us back together so we could stay together in college. But we’ve got to make our own choices. It was what I felt was better for me,” Smothers said. “I feel like that’s a school for me to get better and make their organization better, and for me to expose myself.”

Warren Central coach Bruce Robinson said he was happy for his players, and their reward for putting in the hard work to get to this point.

“I’m ecstatic. It’s a real good feeling when you get two in the same year going to two pretty good schools. They’re real happy with their choices, so I’m very happy and pleased,” Robinson said. “It’s very satisfying, because there were some challenges and some bumps along the road. But they kept in focus that they did want to play on the college level and they had the talent to do it. They worked to get it done. Jabari and Daniel are two great kids and we’ve enjoyed coaching them.”