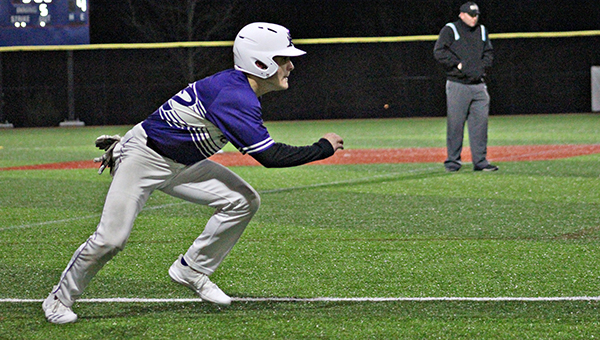 St. Aloysius’ Adam Francisco runs down the third base line in the fifth inning of Wednesday’s game against Tallulah Academy. Francisco went 2-for-2 with two RBIs and three runs scored to lead the Flashes to a 14-4 victory. (Ernest Bowker/The Vicksburg Post)

The first week of the baseball season for St. Aloysius has been about building team chemistry and finding lineup combinations that work. Picking up a couple of wins along the way, though, is certainly a nice bonus.

St. Al won its second game in three days — it beat Riverfield Academy 4-2 on Monday — and will next play March 2 on the road at Bayou Academy. Coach Sid Naron said he was happy with the way the first two games have gone.

“The biggest thing so far is the chemistry. The guys have a really good feel for each other and play well together,” Naron said. “I think as the season unfolds and we find our lineup, our offense is only going to improve. We saw glimpses of that tonight. But we’ve definitely got to go back to work.”

The offense didn’t seem to have many problems chewing through Tallulah Academy (2-1) on Wednesday. The Flashes had nine hits, scored in four of the five innings before the game ended via the mercy rule, and quickly wiped out a three-run deficit.

After Tallulah took a 3-0 lead in the top of the first, St. Al answered with four runs in the bottom half and never trailed again. Warnock, Francisco, Ethan Parmegiani and Ben Raines all had RBI singles.

Tallulah tied the game at 4 with an RBI groundout by Walker Sullivan in the third inning, but St. Al answered again in the bottom half. Francisco led off with a single and eventually scored on a wild pitch.

The Flashes then scored three runs in the fourth inning and six in the fifth to close out the game.

Francisco, Parmegiani and Haden Luke each drove in two runs for St. Al. Luke, Francisco and Warnock had two hits apiece. Six of the nine starters had at least one hit, and all nine either reached base at least once or drove in a run.

Dee Morgan was the only Tallulah player with multiple hits. He went 2-for-3 with one RBI.

“I was really pleased with the offense as the game unfolded. We had a lot more disciplined at-bats. Our senior leadership stepped up and had some big at-bats and drove in some runs,” Naron said.

Naron was also pleased with his pitching. Starter Carter Magee was knocked out of the game in the first inning, but Lane Hubbard allowed only one run in 4 1/3 innings of relief. He allowed one run on three hits, walked one batter and struck out six.

The biggest disappointment, Naron said, was that the three-hour game didn’t go on a little longer. He had some other pitchers he’d planned to give some mound time to, but they didn’t get the chance when the game ended early.

“I’m really surprised our pitching has stepped up. We were really hoping to throw two more of our arms tonight, but we didn’t get them in there at the end. We’re definitely excited about our pitching staff this year,” Naron said. “It’s a catch-22. You want to win, but at the same time you’ve got some guys you want to bring in that you haven’t seen. That’s something we missed out on at the end of the game.”

Marsh Wood also drove in two runs for the Trojans, who only had three hits but took advantage of nine walks and two hit batters to cruise to a run-rule victory.

Ty Schaufele had five strikeouts in two scoreless innings on the mound. Hayes Hopkins pitched one inning, and Thompson worked the last two to finish the shutout.