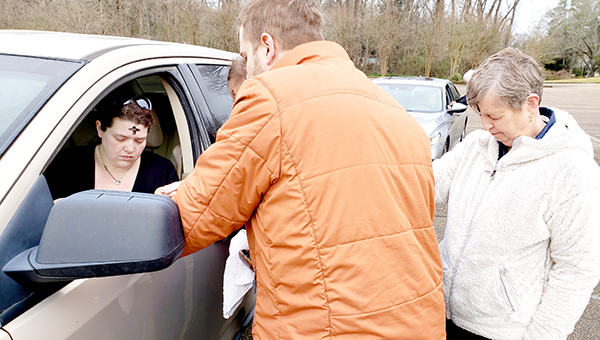 The Rev. Austin Hoyle, center, and other members of the Hawkins United Methodist Church Drive Thru Prayer Team pray with Amanda Cunningham at the ministry’s Ash Wednesday Drive Thru Blessing Wednesday. The prayer team holds prayer services the first Thursday of the month from 7 to 9 a.m. in the church parking lot. (John Surratt/The Vicksburg Post)

Wednesday morning, six members of Hawkins United Methodist Church gathered in the church parking lot to offer an Ash Wednesday prayer, a blessing and ashes to anyone seeking a spiritual beginning to the Lenten season.

“This is the first year we’ve done this,” said Larry Holman of the church’s Drive Thru Prayer team. “We’ve thought about doing this in the past but never did until now.”

But while the Ash Wednesday blessing was a new custom for the group, it was not the first time the members have offered prayers to people passing by the church on Halls Ferry Road on their way to work, school or other destinations.

For the past six years, the Drive Thru Prayer Team has met in the parking lot the first Thursday of each month from 7 to 9 a.m. to pray with anyone who believes they need spiritual guidance to help them through the day.

A sign at the entrance to the parking lot directs people to pull in next to the tent, where the members of the ministry talk and pray with them.

The idea, Holman said, came when he and his wife Kay saw a similar church program on television while they were involved with a mission in North Mississippi.

Kay Holman contacted the church and received information about the program.

“We tried to apply that here, but it took about 2-to-3 years before we could get people to do it; who were willing to come out and do it,” Larry Holman said.

The number of team members attending the monthly prayer ministry varies, he said, but someone is always there, rain or shine, heat or cold. “We’ve canceled maybe once or twice in six years because it was too cold,” he said.

He said the reception the team receives varies.

“It could be from zero to 10 or 12,” he said, adding sometimes people will share their spiritual needs with the group.

“People are hurting,” Holman said. “People have needs; people have drug issues, health issues, all kinds of concerns. We just listen to them and pray for them to heal.”

Hawkins pastor the Rev. Austin Hoyle said the Ash Wednesday program was the first service he has spent with the team.

“This is an interesting one because Ash Wednesday isn’t something we’ve done in the past,” he said. “I feel like we’ve had a good number of people just come through (Wednesday) who wouldn’t otherwise have had a blessing. I love this ministry.”

Hoyle said the Drive Thru Prayer Team is one of several programs involving the church and its members.

“Most of the members here selflessly give hours to help other people,” he said. “We have people here who work with those suffering from addictions, helping them to find recovery. We have people who just are passionate about feeding the hungry and clothing the homeless.

“It’s truly a place that embodies and practices the teachings that Jesus has passed down to us.”